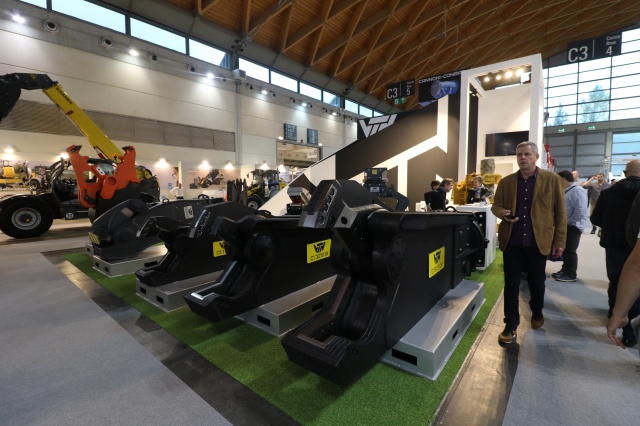 New products for demolition and recycling at Ecomondo 2019

PDi Magazine paid a visit to the green technology exhibition Ecomondo to find out what products and innovations have been developed for the construction and demolition sector to contribute to the circular and green economy.

Lots of visitors and lots of sectors best describe this year’s Rimini show Ecomondo. Manufacturers of construction and demolition equipment comprised but a small portion of exhibitors, with one of them being Bari based hydraulic hammer manufacturer Indeco. Its latest product, the IRP 5 X, belongs to the IRP X range of rotating pulverisers and is described as the ideal workmate for excavators from 6t-12t. “We premiered it at bauma earlier this year,” explains Francesco Raco, area sales manager. “This is the smallest crusher we have, with a maximum jaw opening and a 360° rotation, as well as wear plates and interchangeable teeth.” In addition to the IRP 5 X, Indeco’s booth also featured the IMG 1700 S, a series of multigrabs and the steel shear ISS 20/30.

Also present was EmiControls, based in Bolzano in North Italy, which specialises in dust, fire and odour protection. It has just released CURT, management software for the automatic monitoring and control of dust controllers and systems. “We saw the need for software like this,” says Monika Zipperle, marketing manager of EmiControls. “You can install it on a regular computer, manage your dust controllers through the software and connect it to several different inputs.” EmiControls also exhibited its dust controller V12S as well as the stationary fire protecting turbine FT10E and odour controller V12SO.

Brokk presents the ‘smallest demolition robot in the world’

At Brokk’s booth, right next to the large Brokk 170, was a remarkably small product, the Brokk 70, described as ‘the smallest demolition robot in the world’. The Brokk 70 is aimed at safe, mechanized and efficient demolition in confined spaces. It packs more than 100% more demolition power than its predecessor and features the latest Brokk ‘SmartPower’ technology, as well as a fine tuned hydraulic system. The SmartPower electric powertrain increases power from 5.5kW to 9.8kW enabling the demolition robot to power a breaker twice the size, but with 100% more power than its predecessor. The combination of SmartPower technology and Brokk’s upgraded hydraulic design leads to both smoother and more precise movements, making the machine faster to operate. Other products featured were the BHB 205 breaker, cutters and shears from Darda as well as the ‘Ergo Go’ starter kit from hydrodemolition equipment manufacturer Aquajet.

Mantovanibenne exhibited its demolition and sorting grapple SGR 1200, the concrete crusher CR5 and Eagle Shear’s SH140R, to name but a few products, with the Mirandola based company emphasizing its update of the MS22R line. “They will be redesigned and optimised for more speed and power,” says Paolo Mantovanni, who continues, “Mantovanibenne has been in the market for 56 years. In the past 28 years, we have diversified demolition equipment. We have good experience in the field, because of this experience, we have improved the line.”

Simex highlighted the TFC 50 and TFC 100, its new patented cutter heads with continuous cutting, specifically designed for mounting on mini excavators. The system allows the whole width of the attachment to cut without gaps at the centre or side footprints. The company describes it as quiet and precise, as well as versatile and high performing when it comes to tasks such as crushing roots and tree trunks as well as milling asphalt, concrete and plaster. The TFC 50 offers a 370mm cutting profile width and a 230mm cutting profile drum diameter. The TFC 100 offers a 480/430mm width (narrow drums for increased penetration) and a drum diameter of 260mm. Some of the other products exhibited were the CBE crusher bucket and VSE screening bucket.

Trento based dust suppression system manufacturer WLP exhibited its new Demolitor 70, which has a dry total weight of 600kg, installed power of 11kW, and a IP 55 protection rating. It also features a 360° rotation, an elevation of -10° / +40° and a minimum pressure of 0.5bar. “It also features reduced noise and a throw distance of 50m,” explains Mario Passeri, owner of WLP, “This is a typical machine for rental.” WLP also exhibited the Demolitor 50 and the smaller Demolitor 10.

MB Crusher presented the MB-HDS314 shaft screener which features efficient hydraulics, a compact and stable design, replaceable shafts all at a weight of 1.4t, with 225bar and a load capacity of 0.9 m³. The shaft screeners have a patented system for interchangeable shaft kits which can be carried out by the machine operator on site and in safety. Areas of application for the shaft screeners includes recycling, utility work, composting, industrial areas, remediation, fine sifting and crushing asphalt.

The latest from VTN

Excavator attachment manufacturer VTN presented products from its CI hydraulic scrap shear series, the RP2000 rail cutter and the handling and demolition grapple MD210. VTN recently released its ‘LinkoMatic’ a quick coupler system for tool changeover, either with or without the need for hydraulic connections, without the operator having to leave the cab. The system is compliant with EN 474-1 and ISO 13031 and features an integrated hydraulic hook up and connection protection. It prevents hose damage and is environmentally friendly due to the prevention of oil spillage.

Other companies and products at the exhibition included Arjes, Komatsu, Merlo, Doppstadt, Sennebogen, Zato, Rozzi and Gauss Magneti, to name but a few.