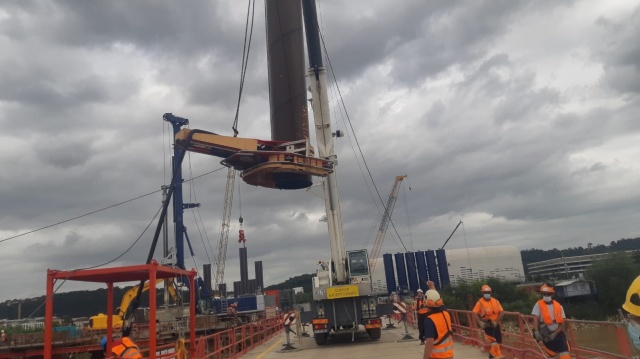 In the world of nuclear and offshore demolition, contractors are often in need of unique solutions to carry out complex work tasks. This year sees new developments in these fields from two manufacturers.

Hilti offers bespoke diamond wire saws developed for complex decommissioning environments. According to Hilti, their bespoke wire saws have a low risk of operator error and enable even an inexperienced worker to cut complex structures as the system is equipped with Hilti ‘CutAssist'. The machines may be operated remotely and cutting can be dry, without liquids or aerosols. According to Hilti, the machines cutting speed has been increased by up to 70% as the wire speed and tension have been increased with robust components and a double layer vacuum brazed wire. The wire life has been increased by up to 70% by increasing the cutting speed and lowering vibrations and wire contact time. The machines are built with a fixed set up.

At another project in Germany, a number of steam generators and steel components needed to be cut in situ. Hilti designed a bespoke wire saw for dry horizontal cutting which can be held by an overhead crane. Hilti also designed a modular portal which can cut various steel components with a maximum size of 4m x 4m or 6m x 4m. Lastly, together with a partner in the UK, Hilti developed a bespoke portal wire machine for nuclear decommissioning in Sellafield, one of the biggest global nuclear decommissioning projects. The portal wire saw with its cutting gap of 2.5m x 2m was developed for vertical and horizontal dry cutting. For offshore and civil contractors, Hilti has developed several machines and consumables for underwater operation. Hilti has also built a mobile demo portal wire saw, which will be shown at different trade fairs.