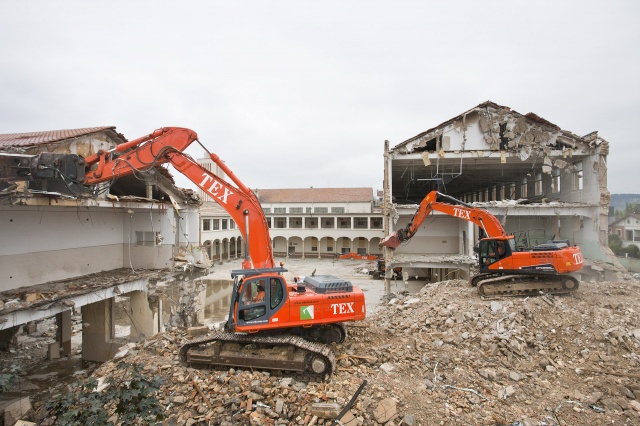 Obras y Servicios TEX is a family business located in Barbatain (Navarra) in Spain with headquarters in Abrera (Barcelona). The company was created in 1995 and has 140 staff, working on both national and international projects. Under the direction of Juan Andrés Solano, the company provides solutions for specific projects in the construction sector.

Obras y Servicios TEX has a large fleet of machinery to meet the needs of its clients involved in public and industrial works, earthworks, maintenance, demolition, urbanisation and waste management. The company has two operations for recycling materials; one for materials from construction waste and the other for aggregate recycling, in which Doosan excavators are routinely working. The latest fleet acquisitions at Obras y Servicios TEX are a Doosan DX170W-5 wheeled excavator and a new DX350LC-7 crawler excavator. These replaced previous Doosan models which had completed more than 19,000h each, providing excellent results throughout.

“I started working with Doosan machinery in 1997,” says Juan Andrés Solano, “We initially bought a ‘Solar’ 250 LCV excavator, after testing it and seeing the results, we bought the same model again. Next was a Solar 340 LCV excavator, followed by another 12 Doosan machines comprising of various models. We currently have 12 DX170W-5 wheeled excavators, the last one acquired in 2021, three DX255LC-5s and an NLC model, plus DX420LC-5, DX340LC-5 and DX520 machines and the latest, a new DX350LC-7 36t crawler model.

“We remain with Doosan since the machines work very well and are very versatile, very comfortable and with a price quality ratio that is the best on the market for us. I have never considered changing brands. We already know them and they have worked very well for us, with no problems. The service provided by Reyvena, the authorised Doosan dealer for Navarra, is also very good and extremely important for us.

“In addition, the evaluations of the operators are very positive. In fact, when we went to buy the first Doosan’s, our operators decided that we should opt for them. Previously they worked with other brands, but they tried them and it was they who opted for the Doosan excavators. They find them versatile, easy to handle, agile and at the end of the day they notice a big difference, both in terms of productivity and in the comfort that the cabs provide them.”

Juan Andrés Solano continued: “These machines give us reliability, all the work we do is quite complex, we work in small spaces and with machinery that cannot have any leaks or other losses. They have to be very clean machines and Doosan gives us that without a doubt.” Illustrating this point, a very complicated job that the company carried out with Doosan excavators has been a demolition project in the heart of Pamplona at the Colegio de los Salesianos, with four teams of Doosan machines. Obras y Servicios TEX demolished this iconic building, cleared all the rubble and left an esplanade ready to be built on. About 20,000m3 of rubble in an area of 13,500m2 resulted and the demolition had to be very precise so that it did not affect the adjoining buildings. The Doosan excavators were working for two months with maximum accuracy and at full capacity.

Juan Andrés Solano commented: “We also carry out dredging for hydroelectric power plants and we build wind farms; we are currently building one in Palencia and there we are working with Doosan excavators, carrying out channelling, footings, roads and earthworks. Renewable energy schemes are already highly valued projects for their ecological implications.”

“My assessment is very positive and the wheeled excavators from my point of view are wonderful. The Doosan DX170W-5 in particular is an intermediate model that adapts to any task, working well in small spaces where it responds perfectly,” added Juan Andrés Solano, who states that it was his machinery manager who was responsible for the purchase of the Doosan DX170W-5. As soon as he tried the machine, he went for it without hesitation. Juan Andrés Solano used it for the first time shortly afterwards and confirmed the decision. He believes it is a superfast, smooth machine. He said of the machine: “Its controls become an extension of your hand, the movements are carried out automatically in a natural way, you do not force your arms to help the machine, on the contrary, as soon as you move your hand a little, the machine already reacts. Its cab is very comfortable, spacious, with good air conditioning, unbeatable visibility of the surroundings, soundproof, robust, with simple day to day maintenance, so we are delighted with this excavator. It is dynamic, very fine when it comes to moving the bucket anywhere, it has it all.”

The DX350LC-7 features Doosan’s innovative ‘D-Ecopower’ technology, providing operators with higher productivity and lower fuel consumption per hour, as well as smoother controls. The technology focuses on the role of the hydraulics system and demonstrates Doosan’s continuous iteration of all the processes and components utilised in the company’s new generation products to achieve unprecedented levels of diesel energy efficiency. The system uses nine sensors to detect the amount of hydraulic oil necessary to accomplish a specific task and precisely meter the amount of oil required rather than continuously forcing a fixed amount of oil through the system, thereby improving efficiency.

Software is utilised to electronically reproduce the full benefits of an open centre hydraulic system with very little energy loss. The hydraulic system and engine horsepower are fully optimised and synchronised, further reducing losses within the system. Improved feedback to the operator through the joystick results in improved machine control and less operator fatigue. The acceleration and deceleration of the excavator workgroup functions are smoother, allowing operators to perform repetitive swinging and digging motions with less jerking movements.

Juan Andrés Solano commented: “We are delighted with the cameras on the new DX350LC-7 crawler excavator, they give you 360o visibility. At a technological level we have appreciated a great evolution with the new DX-7 series, from the factory you have a super complete machine. New technology and programming require training and that is where Reyvena’s support comes in again, training and teaching our operators how to maximise the performance of this model. As I have already indicated, the service of Reyvena and Centrocar (Doosan exclusive importer for Spain, Portugal, and Angola) is excellent, in terms of advice and support. Our mechanics are in contact with theirs, with good attention so that there is no machine downtime, which translates into profitability.”

Try them to love them

“I say that to know the performance of Doosan excavators, the best thing is to get on one and try it out. Both I, who has a lot of experience as a machine driver, and my operators, always opt for Doosan, since we tried them they are always our number one option,” concluded Juan Andrés Solano.