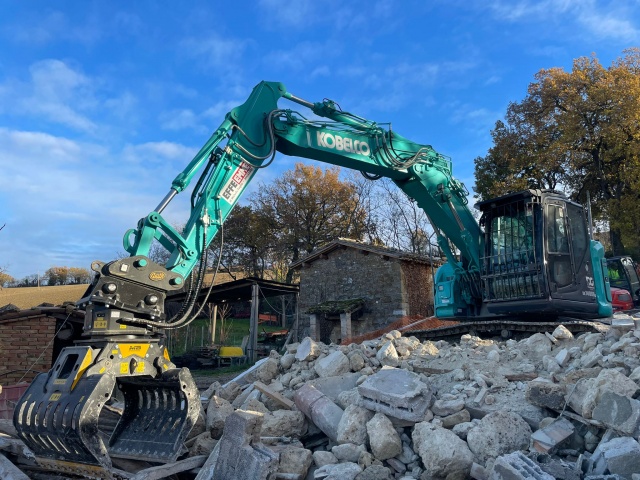 Once it's secured, it won't let go

MB Crusher sorting grapples have been used to demolish and recover as much material as possible in Italy.

Michele Foglia of Effe Emme Edilizia chose an MB Crusher MB-G900 grapple mounted it on a Kobelco to demolish a farmhouse. Rather than knocking it down, he dismantled it piece by piece using the MB Crusher grapple. He recovered all the materials - floors, beams etc. - and still managed to recover the limestone to be reused for constructing a new building. The grapple grasped the materials with agility, allowing work to be safely undertaken both on the building site and on the street side. “We had a great time: it was exact in dismantling the structure, and it worked nimbly. We are amazed that we managed to demolish an entire house with a grapple,” says Michele.

The claws' high clasping force allows recovery without destruction, thus safeguarding materials that can be reused. This prompted Gianluca Venturuzzo of the Venetian company Trevisan Carlo &C. to use MB Crusher's MB-G1200 for several jobs, notably the demolition of a prefabricated building with insulated panels and iron as well as a 1950s farmhouse. “It is a very practical piece of equipment, simple and quick to use. It has very intuitive controls for opening and closing the claws and rotating the equipment itself. For example, in the disassembly, I could take several wooden beams at a time, making the work considerably faster,” says Gianluca.

Roberto Chiappelli from Friuli also chose the MB Crusher MB-G900 because it allows him to do precise work quickly. “It allows you to grab materials just like a hand. It is as if before I was reduced to having one finger. Now I have the feeling of having two fingers and therefore being able to grasp what I want. Having been in the business for many years, I can testify that a long time ago such equipment would have been pure science fiction.” The dismantling of the structures piece by piece already sorts and separates the materials that can then be recycled, disposed of, or reused on the construction site. This saves time and, consequently, cuts costs.

If versatility, safety, and speed are the motto on the job site today, then having an extra 'hand' makes everything easier. All MB Crusher's MB-G grapple models are equipped with a safety valve (which keeps the grapple closed in the event of a leak in the oil circuit). Some are also fitted with a silent block that allows the grapple to be used even in areas where noise needs to be mitigated such as found on construction sites in city centres or densely populated areas. The MB-G grapple can also be equipped with various accessories that make it even more versatile and easy to use.