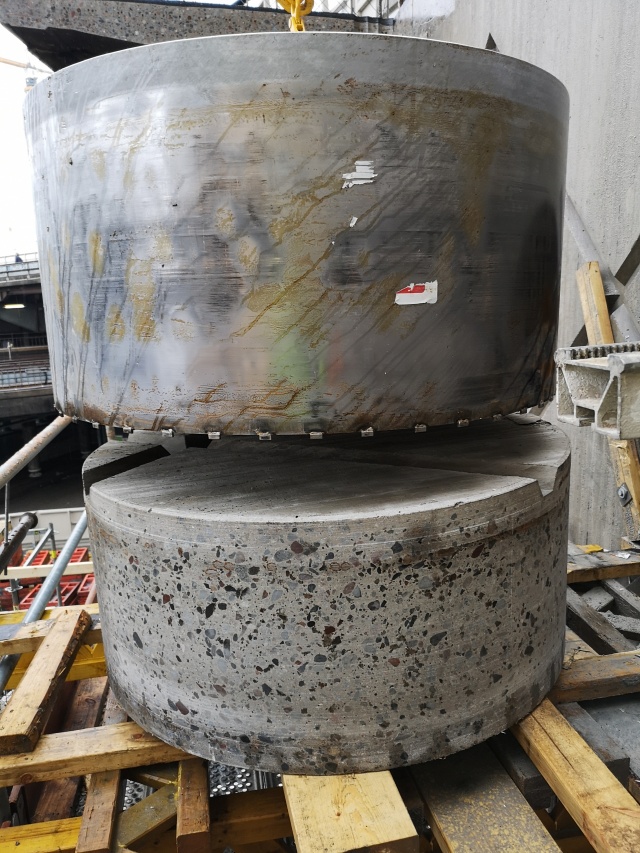 The two Pitkonen brothers, Hannes and Oskar, founded the company Norrorts Betonghåltagning AB some years back. “I started out in demolition in 1994 and got the question if  I could drill. The answer was ‘yes of course’, but soon I realized that it was a bit more to it. I eventually got employment at Håltagarna Borrteknik and was trained by ‘the old school guys’ who used to work at Urab, another large concrete cutting contractor at that time. They introduced me to Pentruder. In 2015 me and my younger brother Oskar started our own concrete cutting company, Norrorts Betonghåltagning AB, and from that it all took off,” says Hannes.

Today there are five concrete cutters in the company, and even though it is a small company, the jobs are not that small. Its first real big special job was when a contractor contacted the company with a request to drill three Ø 600mm holes, around 5.5m deep, and located 2m below the surface, in the docks of the Värta harbour in Stockholm. No one really knew how hard the aggregate was nor how heavily reinforced the dock was. “Our first Pentruder was bought for this project, a hydraulic MD1. We tried several different solutions and machines at first, but finally when we got the hydraulic MD; it was like cutting in butter. The drill bit was delivered by our Pentruder distributor Scandinavian Diamondtool Consulting (SDC) and was 2.3m,” says Hannes.

Since a couple of years back, Norrorts Betonghåltagning AB has been contracted by the construction company Implenia for large infrastructural project in Stockholm. One such job involved a large lock and traffic point at Slussen, where boats, cars, subways, bicycles and pedestrians meet in the centre of Stockholm, which is going through a large modernisation process. For Norrorts Betonghåltagning the job involved several projects, with wire, wall sawing and core drilling. “Last summer we got the task to take down some walls in an old chamber with the Pentruder 8-20HF wall saw. There were no drawings which we could access since parts of it were some sort of old military facility no longer in use. Every time we thought we were done, they found another level of concrete underneath the gravel, and we finally ended up 6m down in the ground. All in all, over 450t of concrete was removed, and this was a job we couldn’t have done without the possibilities to position the Pentruder track feet in different angles, adjust them and also mount one on the floor and the rest on the wall,” says Hannes.

Today Norrorts Betonghåltagning AB have a Pentruder 8-20HF Wall saw, one HF and one hydraulic MD1 Core drill, wire saw modules and a lot of accessories such as a stitch drilling carriage. The newest machine is the MD1, a heavy duty core drill, which really impressed when drilling a 540mm deep and Ø 120 mm hole in a heavily reinforced old concrete bridge beside the Hilton Hotel at Slussen.  The set out was 8m up the wall and the cutters had to build a rig that was stabile enough for the heavy core  which was to be removed. Just the core bit (also supplied by SCD) weighed over 200kg and took quite an effort to get it in place. However, when they started to spin the drill, the cutting didn’t take longer than 2h before the hole was drilled with the Pentruder MD1 core drill.

“For us it is so important with the power and the modularity of Pentruder. The machines are real beasts that are designed for us professional cutters, and they save us a lot of time both in setting up and completing the job,” concludes Hannes.