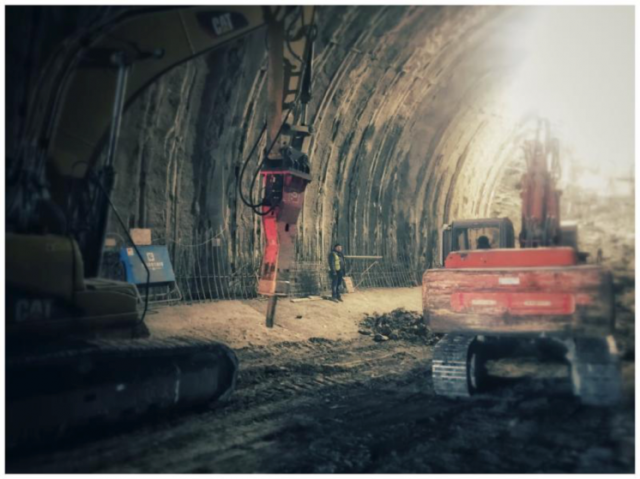 Costruttori Spa, a company specialising in the construction of tunnels, was awarded the contract for the execution of the construction works for tunnels for the road S.S. 652 Fondovalle Sangro in April 2019.

In order to undertake its work, the company chose Promove hammers for the work involved, including 2,465m of tunnels and viaducts.

During the construction, a Promove XP3100 breaker was used making average progress of 1m every 4h during a 16h working day. During the demolition phase ‘in the shell’ (the most delicate phase of the operation where the breaker works in an almost vertical position) the hammer is heavily stressed. Thanks to  combined gas and oil technology, the XP3100 significantly reduces the stresses transmitted to the excavator with the impact force of the piston not affected by the position of the hammer. For this special application the hammer is set up with a compressed air system and dust cover on the tool to prevent dust and debris from entering the hammer, which could reach the piston and damage it irreparably. The Promove breaker delivered high levels of reliability and productivity, drawing on its distinctive characteristics designed specifically for the needs of the demolition industry.