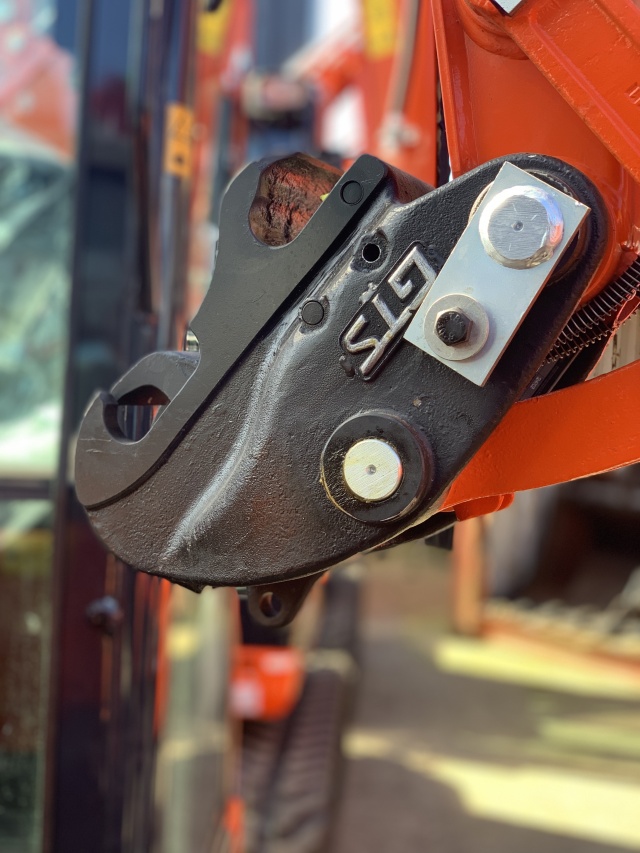 The development and improvements of the fully automatic quick coupling systems for demolition and recycling applications does not stop. Here are some of the latest news from the manufacturers.

Smart fully atomised quick coupler system continuous to be a big issue among demolition and recycling contractors. However, this year it is not quite the same extensive flow of novelties like a year ago. But at that time we had Bauma coming up which was a good chance to show the users. But this year it is instead Conexpo-Con/Agg in just a couple of weeks.

Increasing number of players
The number of companies developing and manufacturing fully automatic quick coupler systems are increasing. However, there are quick couplers and there are quck couplers. The majority of the brands does not really work in heavy-duty demolition and recycling applications. There are as mentioned a number of suppliers like OilQuick, Steelwrist, Lehnhoff, Cat Work Tools, VTN Europe to mention a few and in this feature we are even presenting a new one, Rototilt.

News from OilQuick
Swedish manufacturer OilQuick takes safety in the workplace very seriously and a great deal for their development time goes into delivering the safest quick coupler systems on the market. For the last five years OilQuick has offered their OQ-Looksupport (OQLS) electronic monitoring system, which, according to OilQuick, is the most advanced safety system on the market for excavators. OilQuick now takes the next step by launching OQ LockSupport 2.0. The new system offers new sensors, improved wiring and completely new software. All existing safety requirement from authorities were already met with the first system and 2.0 follow in those footsteps. OQLS guides the operator through the entire attachment exchange process, standardises the operation of the locking function and provides the operator with information via a cabin panel. OQLS is available for two quick couplers in “sandwich version”, i.e. above and below the tiltrotator.

But that is not all from OilQuick. OilQuick has also introduced an innovative fall protection system – OQSH, which prevents the hazard of attachments dropping around the machine. In the event of careless or incorrect coupling by the operator, OQSH´s safety hooks catch the attachment in all positions. OQSH can be compared to a safety belt in a car, which automatically deploys in the event of an incident or risk of personal injury. As a further supplement, OilQuick has also introduced a mechanical lock indicator – MRL, which clearly informs the operator whether the coupler's locking plungers are in the locked or unlocked position. MRL indicates that the attachment is correctly connected and locked ONLY when the locking plungers are in the correct position under the frame pin.

The biggest news this year from OilQuick is the launch of their new tiltrotator series, OQTR-E. Tiltrotators are maybe not used that frequently in terms of demolition and recycling work but there are applications where they come in handy. Like we have mentioned earlier in PDi, OilQuick and another Swedish company Engcon has started a cooperation. OilQuick is wellknown for their fully automatic quick coupler systems and Engcon for thier wellknown tiltrotators and accessories for excavators. The two players call their cooperation “The Best of Both Worlds”.

OilQuick has also improved the model OQC with a new and stronger rotor. OQC a quick coupler system for pendulum-mounted attachments, primarily intended for use on material handling machines and loading cranes. Some of the new advantages are that it is faster, easy and safe swapping of hydraulic, mechanical and electrical attachments directly from the cab. Further the updated OQC offers maximum profitability and flexibility. Use of the right attachments at the right time makes the machine a versatile tool carrier. In this way, the carrier machine can be used to its fullest and the processes optimised. It is also very flexible due to that all attachments can rotate 360 degrees unrestricted with aid of the rotor. Due to the design it is also very environmentally friendly as it minimise the oil spill during swapping of attachments. It is also optimal for those contractors that use a large number of attachments. It can me equipped with OilQuick LockSupport.

OilQuick is also launching OQTR-N, a cylingderless tiltrotator with OilQuick’s fully automated quick coupler system. OQTR-N is based on the well-known, cylinderless NOX-tiltrotator technology. Continuous 360° rotation and a tilt angle of 2 x 50°. Together with OilQuick's fully automatic quick coupler system OQLS, the operator get a complete aid to streamline and maximise the everyday life. Hydraulic and electrical tools can be swapped in a few seconds without having to leave the cab. Other features are maximum visibility around the tiltrotator, thanks to there being no protruding cylinders, work can be carried out more smoothly and the risk of accidents is reduced. Due to there being no protruding parts, excavating with narrow buckets in confined or deep shafts is made easier, while the risk of damage to protruding cylinders is eliminated. The product also offer high stability and long durability thanks to a specially cast housing with all hydraulics integrated. It has continuous 360° rotation and a tilt angle of 2 x 50°. To see all new products from OilQuick, visit Conexpo-Con/Agg in March 2020, stand F2876.

OilQuick has been active in the North American market for quite a few years now. Several years of steady sales growth have meant that the business now has an established sales organisation, spare parts supply and aftermarket management. OilQuick is represented in a number of areas across the entire North American continent and is growing continuously.
www.oilquick.com
www.oilquickusa.com

Rototilt enters the arena
Sweden has become a mecca for fully automatic quick coupler systems. Now another wellknow player is also coming in to the business. It is Rototilt, worldknown for its tiltrotators, but is now launching Rototilt QuickChange. The new generation of Rototilt QuickChange™ for machine couplers, tiltrotators and tools lets the operator change hydraulic tools without even leaving the cab. Safer and simpler than any other solution on the market, accoring to Rototilt. Additionally, the system incorporates several patent-pending solutions. Rototilt QuickChange™ opens a range of new user benefits. No other attachment on the market offers the same combination of durability, optimized excavation geometry and safety. With Rototilt QuickChange™ you can handle your machine coupler – and the other parts of the system  – automatically from the cab. The risk of swinging or dropped tools is entirely eliminated thanks to the world-leading SecureLock™ system.  The heavy- duty locking construction gives you a machine coupler completely free of play, with few and well- protected components.

According to Rototilt their new system is the leader on the market in terms of safety. The combination of changing hydraulic tools without leaving the cab, as well as integration with SecureLock™ and a number of safety-enhancing design solutions, gives you maximum safety – even if  the operator lose hydraulic pressure.

QuickChange, according to Rototilt, has an unmatched service life. The new generation of QuickChange™ has several unique innovations that combine to give the system greatly improved service life compared to previous solutions. The secret lies in conscientious product development for each function and each component of the system,  as well as perfect integration between Rototilt's tiltrotators, machine couplers and tools. An unbeatable combination of performance, durability and optimized excavation geometry.

Rototilt says that with Rototilt QuickChange the operator get the best of both worlds: The excavator becomes a full-fledged tool carrier that lets the operator to do jobs faster, smarter and with more precision. At the same time, the operator can quickly disconnect his/her tiltrotator in tough environments or when the job doesn't require tiltrotator functionality.

Everything is handled completely automatically without the operator even having to leave the cab.

Rototilt QuickChange is completely new construction with improved design of hydraulic couplings provides up to 50% higher hydraulic flow. It optimizes the use of the machine's hydraulics, giving you the performance you need when working with your most demanding tools. You feel the difference straight away, both while working and in how quickly you finish, even on those really tough jobs.
www.rototilt.com

New quick coulers from Miller in the UK
Miller UK is launching its next generation, hydraulic quick couplers, GT Series, which are suitable for excavators from 1 to 50 tonnes. The brand new Miller GT series range is the lowest, lightest and safest quick coupler on the marketplace, according to Miller, offering 1T - 50T excavators a wide range of pick-ups for any attachment within the same class all from the comfort and security of the cab.?

Some of the key product features are innovative control system guarantees the attachment is only released in a safe position. Unique proprietary operating/locking system ISO13031 and AS4772 complaint. The operator can change attachment from the comfort and security of their cab.  It has a universal variable pin centre design - pick up any attachment within the same class. It is maintenance free and the innovative design encompassing fewer internal components. The system also facilitates quick attachment changes, maximising machine productivity with less down time. The system also eliminate extra equipment on customer’s jobsite as variable pin centre design allows them to easily pick up and swap widest range of OEM attachments from safety of the cab. Also the fact that existing  attachments can still be used without the need for conversions.
www.millergroundbreaking.com