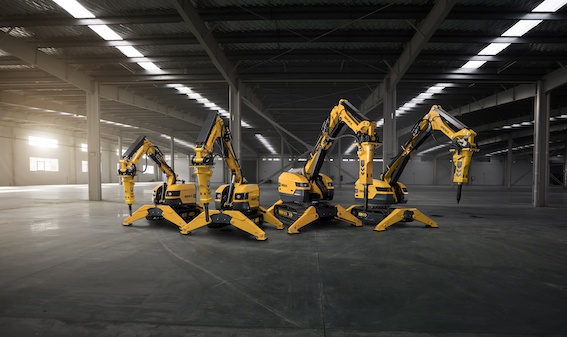 Here PDi takes a look at some the latest developments in remote controlled demolition robots which have been launched during 2018, as well as reporting on the expected growth of the construction robot market worldwide until 2025. PDi's Mikael Karlsson reports.

During 2018 Brokk has undoubtedly been the most active company when it comes to introducing new remote controlled demolition robots.  The Swedish manufacturer introduced four new models at Intermat in April, and very recently the company for the first time ever also introduced a new line of hydraulic breakers.

The Brokk 170 replaces the Brokk 160 in the product line up. Taking the best from Brokk 160 and adding the full Brokk SmartConcept , SmartPower, SmartDesign, and SmartRemote, the Brokk 170 is a purpose designed demolition machine for the construction industry.  With a 24kW SmartPower electric powertrain, this lightweight machine comes with 15% more power than its predecessor. It also comes with the new Brokk BHB 205 breaker and the new Darda CC440 crusher. However, it retains the same compact physical dimensions of the Brokk 160 and its wide range of attachments is fully compatible between the two models.

The Brokk 200 has 15% longer vertical and horizontal reach while retaining most of the compact dimensions of the Brokk 160. The extra chassis length and machine weight ensures excellent balance, even when wielding the heavier and more powerful attachments. The Brokk 200 is said to represent a new standard in compact remote controlled power being ideal for heavy duty but difficult to access projects and applications.

Brokk 300 comes with the more powerful Brokk BHB 455 breaker which is designed to deliver excellent hitting power. Equipped with the new generation of Brokk SmartPower technology, power output is increased to 37kW delivering the hydraulic flow and pressure to fully power the heavier and more powerful attachments it is paired with. Weighing 500kg more, the Brokk 300 still retains the same width and height giving it access to the same confined work sites. A new arm system increases vertical and horizontal reach to an impressive 6.5m and 6.1m respectively.

Finally, the Brokk 520D has been developed to establish a new standard for diesel powered demolition robots with a larger hydraulic breaker that packs 40% more hitting power than the Brokk 400D it is replacing. This eco-friendly 5t machine comes with two diesel engine options: a Stage 4/Tier 4 Final Kohler unit meeting the new EU and North American emission standards, and a Kubota model available for the rest of the world.

The new Brokk 520D is slightly heavier and longer than the old Brokk 400D, boasting a bigger BHB 705 breaker and a 250mm longer work reach. Its heavier duty boom system and increased hydraulic performance means that it can handle the same wide range of heavier, more powerful attachments that are already available for the Brokk 500 released last year. To top it off, the Brokk 520D also adds the clever improvements of Brokk SmartDesign that will simplify daily maintenance and increase machine uptime.

The new Brokk hydraulic breaker (BHB) series of eight breaker models start with the 50kg BHB 55 breaker for the compact Brokk 60 demolition robot, and then goes up to the 700kg heavy and powerful BHB 705 for the recently introduced Brokk 500 and Brokk 520D demolition robots.  “As the leading benchmark in the industry for compact demolition, it makes sense for us to now take the step to introduce our own line up of powerful hydraulic breakers to match the power and performance of unique demolition robots,” says Martin Krupicka, president and chief executive of Brokk.

Other kinds of construction robots on the market are, according to the report, construction 3D printing robots, bricklaying robots, and remote control rescue robots etc. These robots are mainly used in the metallurgical industry, cement industry, building, tunnelling, mining and earthquake disasters. The global construction robots market was valued at approximately €160M in 2017, and is expected to reach €336M by the end of 2025, growing at a compound annual growth rate of 10% during 2018-2025.

Europe and North America are dominating the construction robots market today, however in future China and Japan will play more important roles. This is especially so in China, where the market is extremely vibrant, and more players are looking for the market opportunities.

The Spanish family company Euro Implementos in Barcelona manufacturers a large range of construction equipment and attachments. The family company has recently launched the demolition robot RDC 15.10, which is suitable to work safely in small or dangerous environments. It is a 1t, 15 kW multipurpose machine with, for example, quick coupler, cylinder protections and remote vision camera as optional. The new RDC 15.10 robot has slewing speed of 10sec/360°, max slope angle 30° and max transport speed of 2,5km/h. The hydraulic system capacity is 60l.