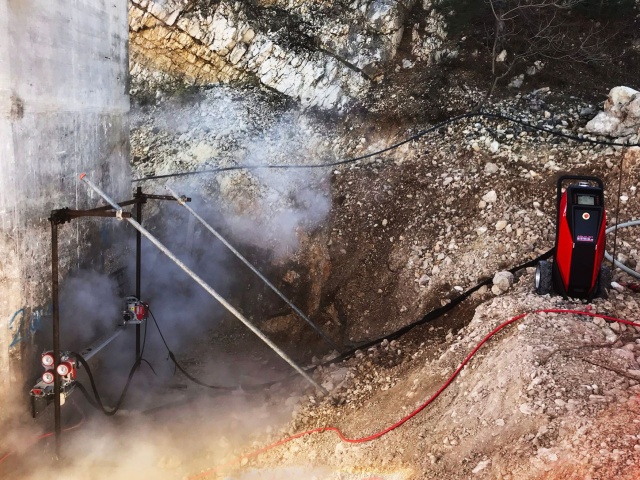 Roger Simonsson, managing director of Aquajet, outlines some of the benefits of robotic water blasting

Traditionally, sandblasting has been the method of choice for rust and paint removal as well as concrete surface preparation applications. However, changing standards in safety and increased levels of environmental protection are causing many to question whether it’s still the best option when compared to other methods, such as robotic water blasting.

Over the last 30 years, advances in hydrodemolition technology have led to water blasting equipment that produces better results, more efficiently and often with reduced environmental impact than sandblasting. These benefits have encouraged many organisations and contractors to now use robotic water blasting techniques. Another major reason has of course been increased safety as sandblasting requires a lot of physical exertion as operators must constantly resist back thrust. Although equipped with breathing equipment and protective clothing, operators are also subject to high levels of fatigue and strain during prolonged operations with the toll on workers often being significant. With robotic water blasting, or hydro blasting however, any heavy lifting is left to the machines while crew members stand safely out of the way.

The water blasting machines are also available with a number of attachments that enable operation over large areas - vertical, horizontal and overhead - while allowing workers to remain safely on the ground. Furthermore, and depending on the system and the area to be covered, robotic water blasting equipment might include a basic scaffolding system, but it is a feature of the machine, not a concern for workers. In other cases, the robots reach can be extended with additional tower sections or attachments, eliminating the need for scaffolding altogether and increasing productivity.  Additionally, robotic water blasting is ideal for confined space operations. In all applications, the use of water eliminates the risk of silica dust exposure.

In addition to safer operation, robotic water blasting offers a level of precision and productivity far above traditional sandblasting. Reapplication of paint or other material is not the final goal of all sandblasting and water blasting applications, but in cases where it is, ensuring uniform abrasion across the entire surface provides a superior bonding surface for longer lasting, high quality results. This is thanks in part to the high pressure available from industry leading water blasting equipment.

The last few decades has seen government agencies increase regulations on dealing with waste resulting from removal and cleaning applications, especially when there is the possibility of contaminating nearby water.  While robotic water blasting waste requires treatment, the process is much easier and more cost effective. This is mainly due to the fact that water blasting’s primary by product is water. Although both sand and water contain contaminants following application, there is no effective way to remove small particles from sand which is not a problem with waste water where particles are easily removed.

Making the switch to robotic water blasting might seem daunting at first, but an operation employing the right system will quickly benefit. For best results, working with a reputable OEM to provide a system tailored to fit the operation’s specific needs is suggested.