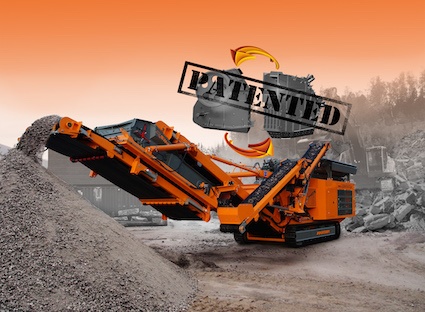 Since its founding in 2004, Rockster has developed two patented systems for mobile crushers. At bauma 2019, the mobile impact crusher R1100DS will be displayed in the open area in front of the B2 Hall / Gate 7 (booth number 12B/2).

This combines both innovative systems (duplex and double functional return / stockpile belt), and as of 2019, it will also be equipped with a Cat C9.3B EUR V engine.

Wolfgang Kormann, chief executive of Rockster says of the development: "When choosing our drive concept, we consider the performance optimised consumption, which can be distinguished from conventional drive types (time consumption). Our experience has shown over the years that with our variable drive system, the consumption optimisation can be up to 13%. This is another step how the use of the latest technology contributes towards the future with reduced emissions. We have chosen Cat Stage V engine in order to reduce fuel consumption, as well as optimise after treatment of the exhaust gases." Another new development is a machine monitoring system (MMS), which will be available for all mobile crushers as of 2019. The MMS offers the possibility of remote maintenance, which minimises any downtime, being controlled by a multifunctional colour display with scratch resistant touch user interface.

The mobile RSS410 double deck scalping screen will also be shown; this features what the company says is the  longest screen box in the compact screening segment, and can be used either as an individual machine, or to produce three final fractions as part of a train. It can be utilised as a pre-screen before crushing for the production of two additional defined fractions, or as a final screening unit after the crusher to separate the crushed product. In addition to the efficient separation of natural stone and building materials, the RSS410 can be used for the separation of coal, metal and topsoil. Beside various scalping screens, Rockster also produces tracked mobile double or triple deck finishing screens and track mounted or wheeled trommel screens.

As well as its production equipment, the company will be showing a track mounted RST18 stacker with a belt length of 18.2m. It is available in four different lengths, from 15m to 30m, coming with Stage IIIa to Stage V engines. The use of the stacker makes it possible to increase daily production while at the same time reduce material handling costs.