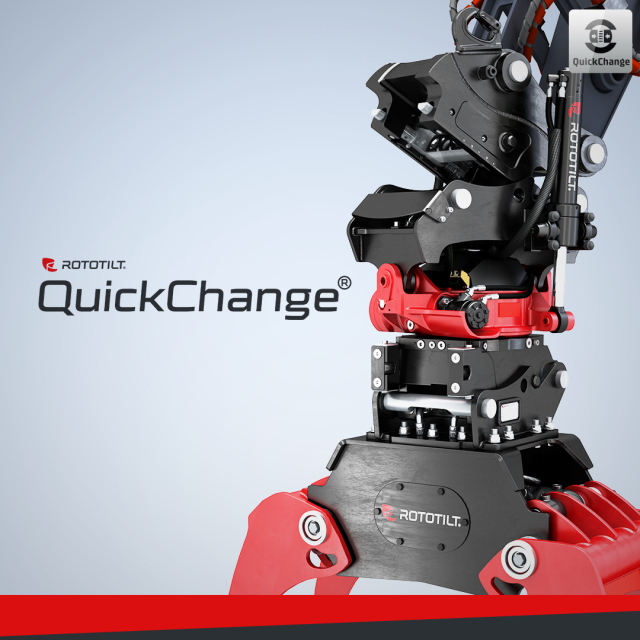 The launch of the system was undertaken digitally, with the live broadcast being led by the company's sales manager in Sweden, Markus Olofsson. During the broadcast, the benefits of the new generation were carefully explained. Rototilt's development manager, Pär Olofsson, said that they have been working for more than two years on the new generation of QuickChange. “The whole work started with an in-depth market research and we studied the pros and cons of existing systems on the market and talked to many users. We carefully investigated what was good and what was bad, and what we could change to the better,” says Pär Olofsson.

Five goals were set up in the development work: the first was to eliminate everyday operational disruptions and the second to eliminate the risk of large and extensive operational disruptions that cost money. The third goal was to maximise the life of the entire coupling member (such as attachments). As a fourth goal, the system would have to comply relevant regulations, and finally, it needed to increase system performance by as much as 20%. The security of the system is something that has been a common thread throughout the project, with Rototilt’s award winning ‘SecureLock’ system being used in the new QuickChange.

When the actual construction of the entire system was determined, a series of tests took place. “We have tested the system in every conceivable way down to the smallest detail in our own lab and out in the field countless times. A large number of users have run the system and come up with a number of tips. And now we are ready to become public with the system,” says Pär. (The launch was originally planned to have taken place at various exhibitions but the advent of the coronavirus pandemic made this impossible.)

Sven-Roger Ekström was the next speaker at the virtual launch and meeting in May. Ekström, who is a product manager at Rototilt, said that the system is being built entirely in Sweden. Like all other quick coupling systems, QuickChange means that the excavator operator does not have to leave the cab when changing tools. In seconds any change can be made quickly and easily from one tool to another without the risk of leakage or the tool coming loose. An automatic mechanism protects the sensitive parts and the bracket itself so that dirt does not enter into the system. When changing tools, the bracket opens and the tool locks. Another function that protects the system is that springs are built into the coupling which means that any pieces of dirt or metal pieces do not move further and damage the system thereby eliminating operational disturbances.

The QuickChange HD (intended for really heavy tools although the system is also available for lighter equipment such as compactors) was demonstrated at the virtual presentation. Ekström says that they are now in full series production of QuickChange. The interest from customers has been reported as ‘great’ with the QC60 and QC70 now being manufactured, with several sizes being released during the year. “I really believe in this system and that it will replace many standard systems,” says Ekström.