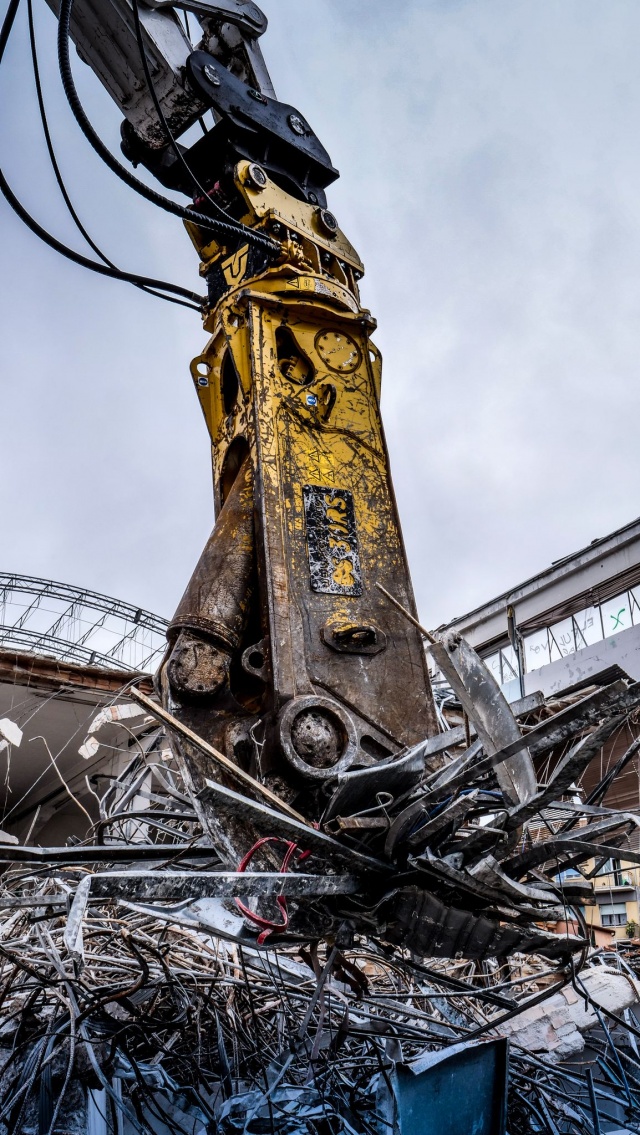 With mass Covid-19 vaccination campaigns currently underway in many countries, there is hope that the global economic situation will stabilise during the first half of 2021. In anticipation of a market upturn, manufacturers of demolition and recycling attachments keep beefing their arsenals up with new models. PDi’s Andrei Bushmarin reports on the latest news from the scrap shear industry.

Demarec builds on the success of the DXS range
Following up on the success of the DXS-40 and DXS-50 models (over 40 units sold in Europe and North America so far), Netherlands based attachment specialist Demarec has added two new models to its DXS range of scrap shears. These comprise of the DXS-60 suitable for 30t-50t carriers (in boom mounted configuration) and 50t-70t (in stick mounted configuration); and the DXS-70 which fits 32t-65t and 60t-80t machines respectively. Featuring a ‘DemaPower’ 2.0 cylinder with four pressure chambers, the shears boast a 25% increase in power while a double acting speed valve ensures very fast cycle times. Currently comprising four sizes, the DXS range will be further expanded in the short term to include the DXS-80 and DXS-90 models.

Rotar updates its  mobile range with new features
This year another Dutch major, Rotar, has updated its range of mobile scrap shears with a host of new features. The fully enclosed piercing tip has been redesigned into a three bolt assembly, whilst new blades have been positioned more securely. The replaceable piercing tip is now bolted, which is a significant improvement over the conventional welded type. After an extensive testing program that went on for over two years, Rotar is now absolutely convinced that the three bolt assembly is what demolition and scrap processing professionals prefer.

Trevi Benne has 14 ‘Marilyns’ to offer
Trevi Benne is another Italian heavyweight that attaches great importance to the scrap recycling business. Its ‘Marilyn’ CS series of mobile shears includes 14 models, from the tiny 300kg CS 03R to the massive CS 200RS, weighing almost 20t. Such an extensive portfolio of attachments allows the Italian manufacturer to offer its customers a suitable model for any base machine in the range of 1.5t to 300t. All Marilyn models bear the classic hallmarks of a modern high performance shear: a cylinder completely protected by the frame, speed valve, pin adjustment system to prevent jamming and reversible and adjustable blades for highly productive and low maintenance operation.

Mantovanibenne’s soaring ‘Eagle’
Mantovanibenne’s proven Eagle series of rotating scrap shears currently includes 12 models, ranging from the smallest SH25R (380kg) all the way to the biggest SH200R, which weighs over 20t and can only be handled by 170t to 200t machines. The shears come packed with an array of special features for efficient scrap metal processing, including the reversed cylinder being shaped to maximise structural strength. The mouth’s design allows the movable jaw to exert the maximum force on a reduced surface area, with the trapezoidal blades improving mechanical stress resistance and can be used on three sides before replacement. The piercing tip and frontal blade are interchangeable and ensure high piercing and penetration power while protecting the metal structure from wear. The dual adjustable guide makes it possible to maintain the correct alignment between the movable jaw and fixed body. The patented ‘Manto-Autolube’ system keeps the tool constantly lubricated, minimising the need for maintenance.

Small Indeco shear doing a great job outside Bologna
An Indeco ISS 10/20 shear is being used to dismantle two turbo compressors at a major natural gas storage facility in Minerbio, just outside Bologna. The project is being carried out by Stogit, a subsidiary of the Snam Group – one of the world’s leading energy infrastructure operators. Stogit manages nine natural gas facilities in Italy, placing particular importance on the safety and efficiency of its operations. When the Minerbio site came up for renovation, the project was divided into three stages: the first stage, which is currently underway, involves extensive site preparation work which, in turn, means the demolition of all aboveground structures, piping and the reinforced concrete foundations of the two turbo compressors that had reached the end of their service life. Stogit assigned the task of dismantling the compressors to Sicilsaldo/Nuova Ghizzoni, a contractor specialised in construction of gas pipelines and plants with a strong domestic and international track record.

Sicilsaldo/Nuova Ghizzoni is currently part of the consortium undertaking the construction of the TAP (Trans Adriatic Pipeline) pipeline that will cross the Adriatic to bring natural gas from the Caspian Sea to Italy. Sicilsaldo/Nuova Ghizzoni is renowned for its experience and highly skilled staff with a vast machinery fleet comprising of hundreds of units at its disposal. For this particular job, the contractor decided to augment its arsenal further with an Indeco ISS 10/20 shear. With an operating weight of 2.4t and maximum clamping force at the tip of 120t, the shear boasts an outstanding power to weight ratio. Construction site manager Luca Di Vita, who represents the company at Stogit, says that the size and power of the attachment were decisive factors. “The choice of a relatively small shear was prompted by the need to operate within confined areas. A larger shear would have implied using a bigger excavator, which would have compromised the mobility and, eventually, the productivity. The high concentration of service roads and footpaths at the site also limited the space availability. Even though the ISS 10/20 appeared somewhat undersized compared to the massive structural elements it was cutting, the shear demonstrated an exceptional productivity. This allowed us to reduce the amount of manual labour, which significantly increased the speed and particularly the safety of the demolition process.”

Genesis Attachments extends ‘Razer X’ multi jaw demolition series
At the end of 2020, US based Genesis Attachments announced the launch of the new GRX 295 - the second model in the award winning Razer X multi jaw demolition series. Designed for 30t excavators and featuring jaw change outs in under two minutes with the excavator operator staying in the cab, the GRX 295 is available with shear, cracker or pulveriser jaws. Jaw openings range from 510mm for the shear jaw to 970mm for the cracker and pulveriser. Jaw depths are 510mm, 810mm and 760mm for the shear, cracker and pulveriser jaws respectively. The GRX's short, flattop head with bolt on bracket shortens the centre of gravity, making it easy to change mounting for different carriers. The heavy duty pivot design is integral to the jaw set, providing a power curve to match each jaw’s primary application and versatility for concrete and structural steel recycling, C&D processing, and general and bridge demolition.