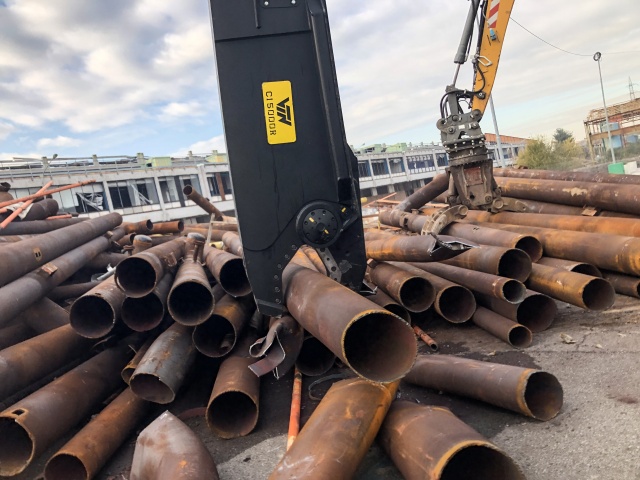 The development of the scrap shear was pioneered in the US in the 1980s by such giants of the excavator attachment industry as Roy Labounty and Bruce Bacon. Since its inception, the shear design has gone through a number of iterations before acquiring its current look. Today’s scrap shear is a staple item in every respectable attachment supplier’s arsenal, with European and Asian manufacturers steadily gaining ground on their North American counterparts. PDi’s Andrei Bushmarin presents the latest updates in the scrap shear market.

The FS145 - a new kid on the ShearCore block

Based in Superior, Wisconsin, ShearCore has introduced this year its new FS145 mobile shear, the largest in the company’s product line of attachments for the demolition and scrap recycling industries. Lead designer, Ross Christenson says about the new model; “The FS145 shear has been designed with less welds, fewer pieces, and is structurally stronger.” Bruce Bacon, president of the Exodus Group, states: “The new FS145 shear model is the culmination of the company’s design policy of, ‘begin every design with a foundation in experience and a desire to improve’. This shear model exemplifies that policy with a new tip design to handle the massive force this shear delivers. A new ‘shark fin’ rear lug design transfers stress in a new and improved method over any previous design in the mobile shear world, which allows higher forces to be distributed over greater mass. What this means to the customer is that this shear punches above its weight class; a big advantage in the steel processing world.” Weighing in at 12.7t, the rotating FS145R has a jaw opening of 1.2m and a reach of 4.5m. The minimum excavator boom mount is 65.7t while the minimum stick mount is 113t. The FS145 is also available as a non-rotating model. The FS145 now brings ShearCore’s Fortress mobile shear range to eight models. The Fortress line also includes the concrete processor ‘cracker’ series.

Starting April 2020, US based trendsetter in scrap shears LaBounty will start rolling out four new Legend models. The new shears are equipped with the full protection indexable piercing tip, ‘Dual Max Indexable Protection’, which defends the shear from wear, reduces the need for maintenance and hence any downtime. The Legend’s jaw design also produces up to 10% more cutting force than previous offerings. The attachments feature the ‘InSite’ advanced telematics platform that provides actionable information about the shears’ condition and activity, such as job tracking, jobsite mapping and remote diagnostics. With the InSite app, available for iOS and Android, users have access to valuable information in order to optimise shear performance.

Allied-Gator Inc., another US based player, has been providing innovative hydraulic attachments for the scrap and demolition industries for over 40 years. Currently its MT ‘Multi-Tool’ series includes 11 sizes, ranging from 363kg to 23,600kg, that all utilise interchangeable jaw sets. The MT ‘Quick-Change’ ‘Shear’, ‘Cracker/Crusher’ and ‘Densifier’ jaw sets ensure versatility. The MT delivers high levels of power due to its patented ‘Power-Link and Guide’ system, with versatility and power being further enhanced by the proprietary ‘Serrated Gator Blades’ designed exclusively for the MT mobile shear. These blades are said to outlast conventional shear blades by up to 50% when processing general scrap, and up to 90% when shearing steel wire and cable. As Allied-Gator moves into the future, it will be interesting to see how the MT’s innovative technologies and proprietary design features can help scrap or demolition operation become more productive and profitable.

The brand new Demarec DXS-40 and DXS-50 mobile scrap shears are engineered to deliver high cutting force and optimal performance to weight ratio thanks to patented DemaPower 2.0 cylinder technology. Unlike a conventional cylinder technique utilising two oil chambers, DemaPower 2.0 technology is based on four cylinder chambers, two way oil regeneration for open to close operations in combination with high shearing forces, which results in very fast cycle times. The DemaPower 2.0 system generates 25% more power which results in a closing force equivalent to that of a shear one or two sizes up. The speed valve works in two directions during opening and closing. If the jaw senses resistance during closing, the valve switches from ‘speed mode’ to ‘power mode’ and the full cylinder force from the DemaPower 2.0 cylinder becomes immediately available. According to the Dutch manufacturer, the DXS shears deliver up to 20 -30% more performance than rival brands, whilst reduced fuel consumption is another benefit of this solution. The DXS-40’s and DXS-50’s other remarkable features include a powerful swivel to avoid high oil temperature and ensure high working speed, with the patented ‘DemaSafety System’ protecting the cylinder against excessive pressures (above 450 bar) on the rod side of the cylinder.

The Scrap Shear Range (RSS) from Finland based Sandvik company Rammer, comprises of nine models, fitting 4t to 90t carriers. Manufactured from wear resistant HB400 steel, the shears feature hydraulic rotation, rotation protection, heat treated pins and bushings as well as weld free cylinder rods. All new models are equipped with a speed valve for improved cycle times, whereas a smart jaw design allows the material being cut to fall away from the cutting area, thus enhancing performance and increasing uptime. A central pin adjustment system helps prevent jaw deviation to maintain maximum cutting performance. This system has been proven to reduce operating costs by minimising the amount of material stuck in the jaws.

Hydraram rolls out the ‘Terminator’

Netherlands based Hydraram has recently shipped the first units of its newly developed HRS-27T scrap shears to customers in Germany and Australia. The letter ‘T’ in the model designation stands for ‘Terminator’, which speaks volumes about the shear’s power and efficiency. Weighing in at 2,680kg, the new model boasts a jaw opening of 855mm and delivers high cutting force. Due to the combination of wide jaws and relatively low weight, this model is ideal for mounting on long front excavators. Made from Hardox ‘Hituf’ steel, the shear is equipped with two hydraulic motors, two reversed cylinders and a double bearing slewing ring. With a working pressure of 350bar and an oil flow of 250-350bar, the HRS-27T fits 23t to 34t machines or long front excavators which can carry a weight of up to 3,000kg. With a cutting force of 120t at the tip and 540t in the middle of the rear blade, the shear is capable of cutting 600mm x 300mm I-beams with thicknesses of 12mm x 17mm.

Finland based supplier Green Attachments now offers the ‘Yellow’ SH range of scrap shears consisting of 11 models to fit 7t to 130t excavators. Intended for heavy duty applications, the shears are manufactured from wear resistant steel. Long reversible blades allow the cutting of big beams while optimum kinematics helps keep steel objects deep inside the jaws where the pressure is at its maximum. An optional speed valve is available for increased performance, whilst bolt on piercing tips make maintenance easy and have adjustable cushions for precise and reliable movement. Axles are hardened and greasing points have been designed in a way to make maintenance easy. A heavy duty pivot pin adds strength and durability, with changeable oversized steel bushings helping extend the shear’s service life. Hydraulic rotation simplifies the positioning of the tool as is essential when the shear is used for material sorting. Rotation is provided by the orbital hydraulic motors with a planetary gear and double pressure relief valves. The shears have a removeable maintenance cover to shorten service time.

Based in West Sussex, UK, BPH is a specialist supplier of excavator attachments under the brand name Prodem. Developed for working in the toughest demolition and recycling environments, the Prodem shears feature a bolt on piercing tip and blades. Thanks to an innovative speed valve, a reduction in cycle times regenerates power and protects the shear by eliminating internal oil pressure peaks. Twin upper jaw guides make for precise alignment, increasing cutting power and efficiency. The shear’s cylinder is accessed via bolt on access panels, making it easy to service and maintain. A weld on upper jaw protection system reduces maintenance and build-up on the upper jaw, thereby reducing downtime on site. The smart design also reduces stress and wear to the upper jaw with the blades being able to be turned up to four times before they need to be replaced. Available for purchase or hire, the Prodem dedicated shear range includes 14 models to fit excavators weighing between 3.5t and 310t.

Italy based manufacturer VTN Europe has expanded its CI series of scrap shears with the addition of four new models: the CI8000 R, CI10000 R, CI15000 R and CI20000. The letter ‘R’ in the model names stands for ‘revolution’ or ‘rotation’. The new shears benefit from an improved design and the use of special steels allowing the frames to withstand high loads. Other highlights include an inverted cylinder and a piercing tip with a special fastening system to increase wear resistance.