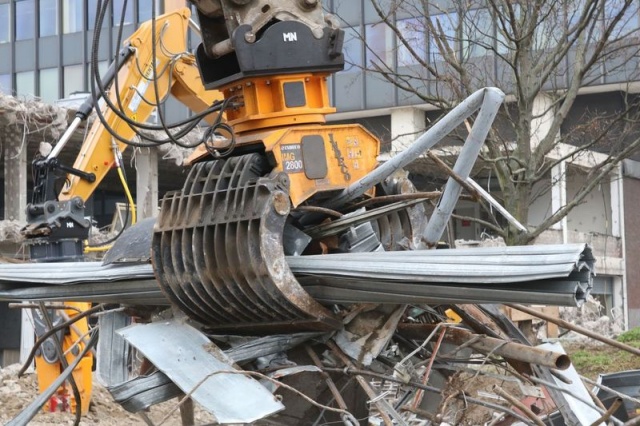 Servisa and Indeco partner to demolish the Berlin Deutsche Post headquarters in [...]

In December 2020, the company Servisa completed demolition of the Deutsche Post headquarters in Berlin. The technical and logistical aspects of the project made it a tough challenge, given the site was located in the city centre.

The structure to be demolished had been built with high resistance concrete (with an unconfined compressive strength over 45MPa) and rebar reaching diameters of 50mm and 80mm in the areas of the foundation and plinths.  The project was concluded successfully with the help of Indeco attachments, which made the difference in terms of productivity and scheduling. As well as an HP 5000 hydraulic hammer were a pair of multifunctional IMP 25 combi cutter jaws which could be easily transformed into a breaker, crusher or shears according to need.

An IRP 18 X pulveriser was used to carry out the primary crushing of over 3,000m3 of demolition waste. This attachment performed very efficiently thanks to its geometric design, which achieves the minimum variation in pulverising force between the start (maximum opening) and finish (minimum opening). This feature increases constancy and efficacy in the crushing action and thereby reduces working times and stresses transmitted to the excavator. It also delivered productivity due to its hydraulic system with a ‘regeneration valve’, which enables the movable jaw to be closed more quickly under no-load conditions, allowing all available force to be applied only when the material is being crushed.   Another valuable asset was the IMG 2800 D multi grab jaws, which has high levels of manoeuvrability and a mounting bracket making it compatible with other Indeco products.

Servisa Group is the largest demolition and environmental services contractor in the Berlin-Brandenburg area.  Despite its size, it has remained a family owned company since its foundation in 1971, and is one of Germany’s major contractors in this sector. CEO Sascha Hellwig stated: “We started out as demolition contractors, but our activities now extend to earthmoving and transporting waste material to disposal facilities.  We also hold a license authorising us to perform all recycling activities, also for others. And over the last couple of years, we’ve entered the logistics sector, providing construction companies all services related to job site preparation.”

Sascha then explained developments in the sector in which his company operates. “I think there’s the real possibility that demolition contractors can become subcontractors of recycling companies. This is because the problem of transporting waste to disposal sites has more and more strategic importance, and it’s the reason why we’ve decided to consolidate in both directions. Here in Berlin, for example, one thing is to send a truckload of waste material to the disposal site, and quite another to haul away 800,000t, as we did last year. In the future, it won’t just be trucks, but maybe even trains, barges and ships. Often we’re dealing with structures from the 1970s or 80s that contain special waste, such as asbestos. For all these reasons, just having an excavator with a big hammer is no longer enough to call yourself a demolition contractor; the concept is much broader now.”

“Presently, we have 23 excavators, 20 trucks, and 100 machines, including attachments. When we decided to purchase new demolition equipment, we looked around to see what the market offered and decided to try out Indeco. Another factor was that the Indeco and Servisa technicians already knew each other; that’s not a minor consideration, as it’s very important that our people have a good relationship with our equipment suppliers. And besides the intrinsic quality and productivity of the attachments, we really liked Indeco’s whole approach because, I emphasise, there is an increasing demand to separate the waste material on site. I have to say that our experience with Indeco to now has been very positive from every standpoint.”

Many job sites in Berlin

“We’ve got a lot of sites active. They are all large scale structures, residential and office buildings, and also malls.  For the most part they are situated in the city centre, in Alexander Platz for instance, where over the next few years six skyscrapers will be going up. Right in that part of the city, our job will entail demolition and job site preparation for later construction, which also includes removing the foundations and taking care of logistical aspects.” Sascha then explains how big Servisa is at present: “We have about 150 (employees), but before Covid, we had intended to increase that number to 200. Fortunately, we have an excellent network in the Berlin area, and have been able recruit labour, especially from Eastern Germany and south eastern Europe. They are willing to work hard and also to take on the physical challenges of a demolition site. It’s tougher to find staff to manage the work phases, because there’s a lot of competition among the companies for hiring qualified technical personnel.”

Training and developing staff has also proved vital. “Over and above the technical aspects, we want them (employees) to become part of Servisa Group in every way. We also need staff that can handle a variety of aspects and are willing to develop their professional skills. We like working with young people because they’re so motivated. And it’s important that, aside from fulfilling their assigned goals, they have a certain degree of freedom, and that they actively contribute to the job within a less rigid, more efficient organisation where they give the best of the themselves individually and enhance the work of everyone else.”

Sascha sees his relationship with Indeco developing: “If we want to grow in the sense I mentioned, we have to rely on one or two partners for machines and equipment who will flank us both as regards product and assistance. The business is changing, and we see that Indeco is orienting itself in that direction. I’m convinced that a partnership between Servisa and Indeco is a win for everybody.”