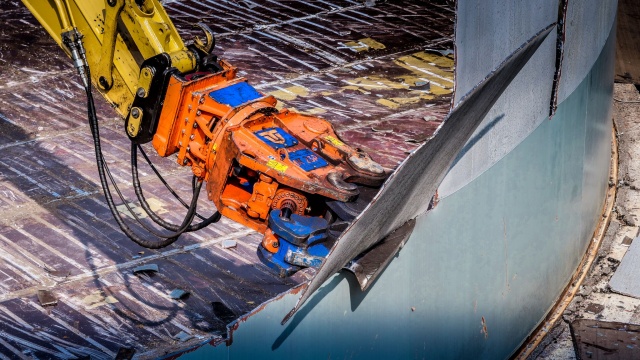 For cutting the sheets that make up the supporting structure of a tank, a traditional shear is often not the most suitable equipment.

It is therefore necessary to have equipment with a specific profile to facilitate penetration and makes clean and precise cuts to tanks, silos, cisterns and so forth. Trevi Benne’s MK system has specifically designed ‘mouth geometry’ to cut sheet metal plate whilst advancing slowly and progressively, both vertically and horizontally, leaving a space for the release of the cut metal.

In Grancia, Canton Ticino in Switzerland, a Swiss contractor dismantled eight steel tanks using the Trevi Benne ‘Multi Kit MK 23P Processor’ equipped with booster and ‘CL’ tank shear kit. The 1960s built storage facility, owned by Pina Petroli, is one of the largest in Switzerland, with its main tank having a capacity of 33M/l of fuel, measuring 46m in diameter and 19m in height with a plate thickness of 15mm. The modus operandi, replicated for all the tanks of the property, was to eliminate the cover from above using a Hitachi ZX 470 excavator with a 30m high reach boom equipped with a ‘Multi Kit MK 18P’ and a 2t ‘CS’ shear kit. The operator chiselled the entire upper part of the tanks and then attacked the steel walls - up to 15mm thick - removing them working ‘in a ring way’, from top to bottom. By engraving the walls vertically, at intervals of over 2m, the skilled operator then horizontally cut panels of transportable dimensions at the base. Once the huge tanks have been demolished, the area will be used for the construction of industrial warehouses for the nearby commercial area.

The Trevi Benne MK Series Multi Kit Processor is a multi-functional tool consisting of a universal body for attaching a variety of interchangeable demolition kits with an innovative system. This means that there is no longer a manual exchange, but a fast hydraulic one, without the need for removing any structural pins. This ‘IZI-Lock’ system allows the replacement of kit on site with a single operator in less than 3min. The addition of an impact booster valve, as with the entire ‘Premium’ demolition line, enables the multiplication of power (the working pressure of the excavator), reaching a peak of 750bar, starting automatically when the material to be demolished offers great resistance. With the use of tools equipped with booster, reducing the opening/closing cycle of the jaws on site translates into gained time and a substantial increase in productivity.