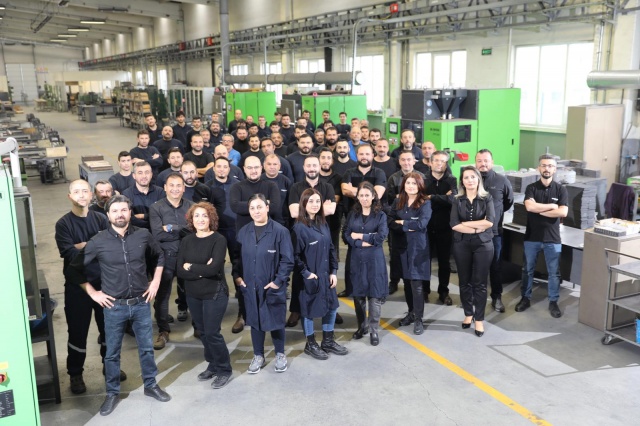 As far as preconceptions go, Turkey is a country more readily associated with blistering sun, sandy beaches, sweet ‘Turkish delight’ and insanely aromatic coffee rather than manufacturing prowess. Well, Ankara based manufacturer Sonmak Diamond Tools does not care very much about such preconceptions. A world class player in the field of diamond consumables, Sonmak has been servicing professional contractors since 1975. Andrei Bushmarin reports on his visit to the Turkish toolmaker.

Unlike the compact and maritime Istanbul, Ankara is sprawled far and wide over the endless hills in the centre of the Anatolia peninsula. The Turkish capital has no sea access, which explains the lack of tourists and the occasional language barrier an international traveller might run into now and then. A home to some 5.6M inhabitants, Ankara is not about relaxation and recreation, it is a political epicentre and a vibrant business hub. If one wants to start a business in Turkey, Ankara is the place to be.

Sonmak Diamond Tools was established by Omer Isik Demiray in 1975 to supply diamond consumables to mining and quarry operators - a massive industry in Turkey. An alumnus of Metu (Middle East Technical University) with degrees in both mechanical and mining engineering, Omer Isik Demiray was the first man in the country to acquire a diamond press to produce tools for cutting granite and marble, which he designed himself. The name ‘Sonmak’ is an anagram of the Turkish words ‘sondaj’ (drilling) and ‘makina’ (machine). Thanks to Demiray’s vision and perseverance, Sonmak became a pioneer in diamond technologies in Turkey and has remained the number one player on the domestic market ever since.

By the late 1980s Sonmak had grown mature and skilful enough to take its game to the international level. German and Dutch users were the first to sample the fruit of Sonmak’s manufacturing expertise, and the experience left them duly impressed. The Middle East and Balkan countries followed suit shortly afterwards. The early 1990s saw Sonmak expanding into Eastern Europe and the former USSR republics. In 1992, in a major shift in strategy, the Turkish company began to focus on producing diamond consumables for construction applications rather than for stone processing. This has seen diamond tools for sawing, drilling and grinding of construction materials being developed which now accounts for some 70% of Sonmak’s total output.

With the advent of the new millennium, Sonmak’s management underwent a generational shift, with Omer Isik Demiray’s nephews Barış Örtülü and Avşar Örtülü joining the company over the space of a few years. Both came to work for Sonmak straight after college. A holder of a diploma and a specialist in business administration, Barış has been overseeing Sonmak’s sales for 22years now. His younger brother Avşar, who has a degree in mining engineering, joined the company in 2007 in the capacity of production manager. Today he also acts as managing director for Sonmak. Together with Gül Demiray, Omer Isik Demiray’s daughter, the brothers own 100% of Sonmak’s shares.

In 2018, Sonmak exhibited at the World of Concrete trade show in Las Vegas for the first time experiencing great success. According to Avşar Örtülü, the show was an absolute game changer for the Turkish manufacturer that until then had only sold occasionally to US customers. From that year on, North America would remain one of Sonmak’s most important overseas markets that just keeps on growing. On the back of the successful American campaign, Sonmak expanded its manufacturing capabilities with the addition of a Diaset volumetric cold press KPV 300 from Dr. Fritsch, a second laser welding machine and a selection of other equipment.

Diamond tools of any kind and now the machinery as well

Sonmak owns and operates a 6,000m2 facility in Ankara where it manufactures a comprehensive range of diamond consumables for the construction and stone industries. Sonmak’s flagship products include diamond blades, core drills, sintered and electroplated wires and grinding shoes. The Turkish manufacturer has a stringent quality control procedure in place, with every product getting tested twice:  first in the laboratory and then in the field. There is a dedicated labelling station at the facility for Sonmak’s own tools and for private label items, which constitute about 11% of total production.

In the past few years, Sonmak has been growing exponentially, with sales doubling on an annual basis. Today the company employs 110 people and supplies its products to every continent on the globe via a 30 strong network of dealers and agents. The USA, England, France, Germany and Australia top the list of Sonmak’s biggest markets for construction tools, while Greece, Middle East and North Africa lead the way as the largest consumers of consumables for stone processing. International operations are handled by sales manager Ferhat Sahin who joined Sonmak in late 2012. Sonmak is now looking forward to bauma 2022, which will be a first for the Turkish manufacturer. Apart from new tools featuring Sonmak’s proprietary aligned diamond technology, a range of surface preparation equipment will be on display in Munich. This €1M project, which Sonmak developed jointly with a machine manufacturer, has been underway for some time. The first trials of the machinery will take place in March.