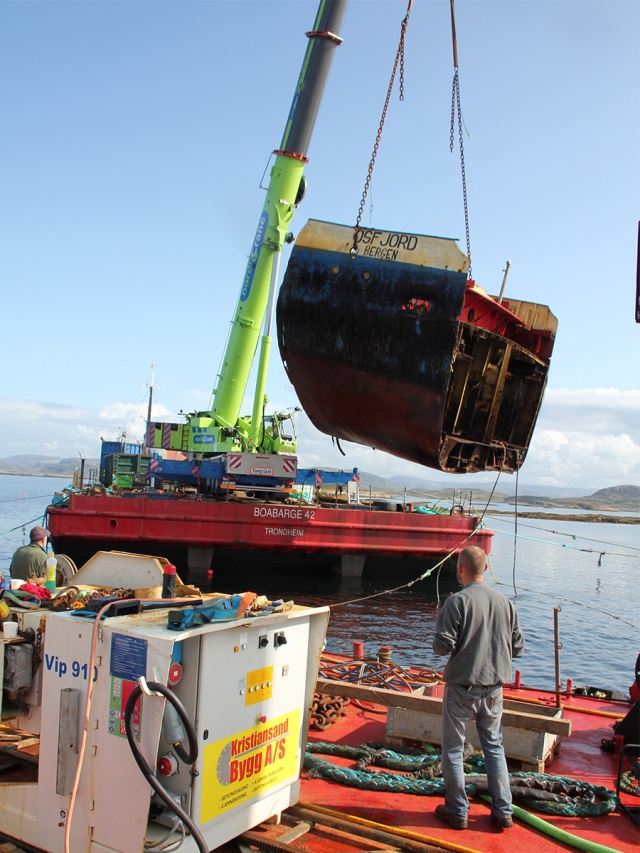 Successful salvage of shipwreck in Norway

During a heavy autumn storm in September 2018, the ship M/S Osfjord ran aground off the coast of Trøndelag in Norway. Several attempts to salvage the shipwreck were unsuccessful, as none of the used methods were able to get the job done.

In a final attempt at salvage, the ship was to be cut into smaller pieces with a wire saw, so that parts of the wreck could be loaded onto a barge and brought ashore. The Norwegian company Kristians and Bygg was awarded the contract and from the very beginning of the salvage operation, the company consulted Tyrolit, as the diamond tool manufacturer already had experience with similar projects. Another complication arose however, as due to very bad weather forecast, the salvage work had to be completed as quickly as possible.

For the realisation of the project, the contractors selected the Tyrolit diamond saw wire DWH-S plus a wire saw from the Italian machine manufacturer Benetti. Tyrolit also mounted two FZ-4S hydraulic wall saw bodies on VAS rails, which could move upwards to ensure a sufficiently aggressive cutting angle. Overall, Kristiansand Bygg only needed 26 days and seven cuts to get the shipwreck safely onto the barge. The diamond saw wire DWH-S did a great job with only 350m of wire being required for the task, which is 100m less than initially estimated.

In addition to the challenging timeframe, care had to be taken throughout the project not to pollute the sea. The Norwegian Coast Guard therefore continuously inspected the seabed with a remotely operated vehicle (ROV) to ensure that the project did not leave any contaminated residue.