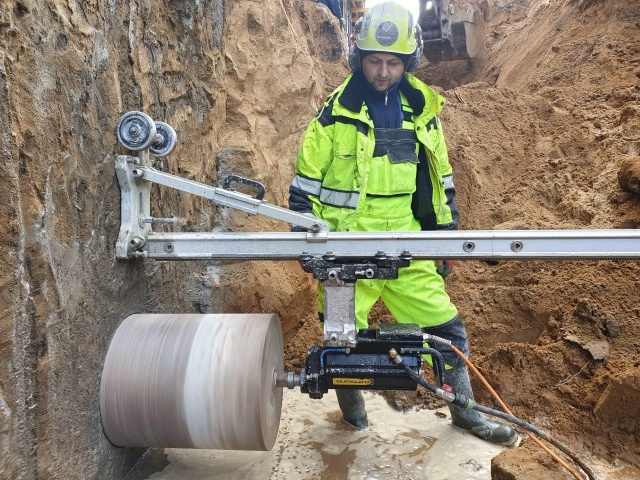 Diamondtech construction found that the two most time consuming tasks in a recent diamond core drilling project were the holes for the cast in situ piles at the Kurskaya Railway Station and drilling for the foundations in Moscow City. In either case, to fit the geology and strengthen the soil, angled holes of 200mm to 250mm diameter and 1m to 1.2 m depth were drilled. The work was performed in phases, but every stage had to be completed in a short time frame so as not to hold up the geology contractor, with the scope of the work and schedule not known beforehand, with the work being done when requested.

Such tasks are a good illustration of Diamondtech’s working ways as it stresses the efficiency of the process it follows, not the quantity of equipment and personnel used. The ‘round up enough people’ approach, so to say, doesn’t work on the recent project. It is simply not efficient economically because it creates many additional problems which would need to be solved due to the tight schedule for each added team of operators. Powerful high performance equipment was therefore required to deliver maximum productivity per shift, per machine. The other important factor was mobility of equipment due to large distances needing to be covered on site, with workers having to cover many kilometres moving equipment around each day.

Diamondtech operated on the principle of creating comfortable and safe working conditions as much as the nature of core drilling work allows. This is why, when looking for power, the company uses exclusively electric systems not burdened by heavy hydraulic pumps and hoses. To this end, the solution adopted came from Estonian company Cuttronix, which supplied powerful 15kW brushless electric technology. The weight of the equipment is comparable to the widely used three phase systems combined with the power of hydraulic systems, a drill stand with the ability to adjust the angle in either direction from the perpendicular, and high RPM allowing work with a soft segment without the loss of segment lifetime. The drilling of holes of 225mm diameter in 1m thick concrete with heavy armature took between 10min and 20min, depending on the steel, and the average life resource of the segment from an Austrian supplier was 12m.

In Diamondtech Construction’s opinion, these were very good results. During the entire job more than 500 such holes have been drilled. The company states that it was rare that there was any requirement for a second drill rig or a third employee on site. In effect the combination of equipment and company expertise ensured minimum personnel due to the powerful and high tech equipment.