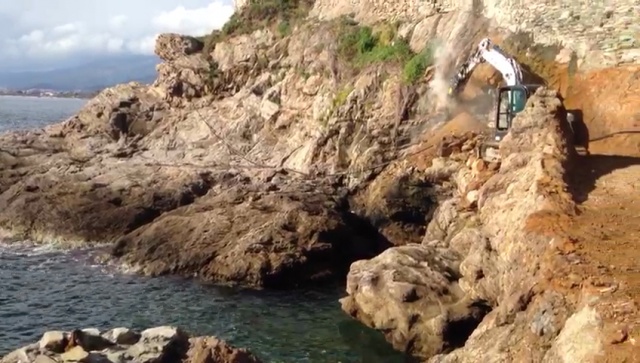 The solution on bridge, tunnel and road sites

Construction projects on bridges and major roads often have a big impact on motorists who are often faced with road closures and an increase in traffic congestion. While the work is carried out, city centres and major roads also suffer from congestion. The companies carrying out road works, road maintenance, excavation, renovation and trenching operations are well aware of the challenges they are faced with, including pressure to complete the work quickly and reopen the roads.

An example of the kind of work and problems experienced by construction companies was the renovation work required on the Augustusbrücke bridge over the Elbe river in Dresden. This involved the removal of the concrete which filled the arches and had caused structural damage. The contractor was seeking a solution that would be suitable for the machine already in use at the site - a Liebherr 918 excavator - and that would not cause any damage to the 18th century structure. MB Crusher provided the solution by recommending the use of an MB-R800 drum cutter (suitable for excavators between 10t and 22t).

Also in Germany, but this time in Berlin, an old bridge over the busy Avus motorway needed to be completely demolished. One of the contractor's objectives was to allow the traffic to continue moving on the carriageways across the bridge. During the first phase large machines were used, after which two MB drum cutters were chosen: the MB-R800 drum cutter and the MB-R900 drum cutter (suitable for excavators between 19t and 35t) to remove the various layers of cement and tarmac and to complete the project.

Another German project, located in Witzeeze, saw a company contracted to remove some of the concrete walls of a bridge and some of the rock found at a depth of between 1m - 1.5m at the bottom of the river to widen the river bed and increase water capacity. For this challenging operation, which is becoming increasingly frequent to prevent flood damage, the MB-R700 drum cutter was used. This tool is capable of operating underwater without damaging its hydraulic and mechanical systems (as with all the other MB drum cutters).