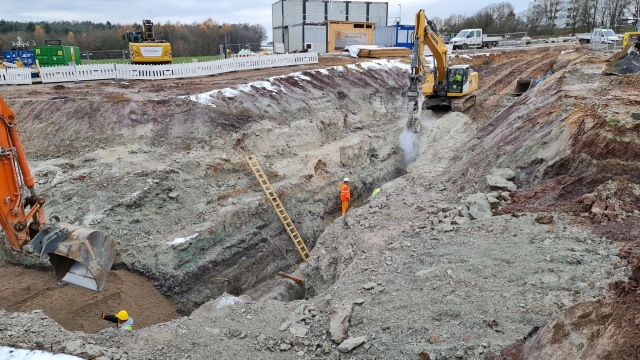 Trenching in sandstone fast and accurate

While upgrading the A3 Autobahn in northern Bavaria, the Steigerwald Süd service area had to be increased in size which involved extensive trenching work.

Civil engineering contractors working on the project rented a 42t excavator with a Kemroc EK 150 chain cutter attachment to carry out the work. Even at depths down to 9m, the chain cutter worked its way through the compact sandstone with precision. Despite working in such difficult geological conditions, consumable costs were kept within reasonable limits. To further aid trench excavation, technicians from Kemroc’s trading partner, Beutlhauser Smart Systems, added a GPS based excavator control system. Combining satellite location data together with data from a reference station on site, the position of the excavator attachment in both horizontal and vertical planes could be determined accurately.

Lukas Emmanouilidis, site manager for contractor Bunte stated: “Of course, the production rate depends on the depth and strength of the rock and this can vary a lot, but as an example, in a two week period in November we completed 50 linear metres of trench which, in these geological conditions, is quite impressive. The grain size of most of the excavated material was small enough to be used directly for backfill. Only a small amount of oversized material had to be crushed before it could be used.”