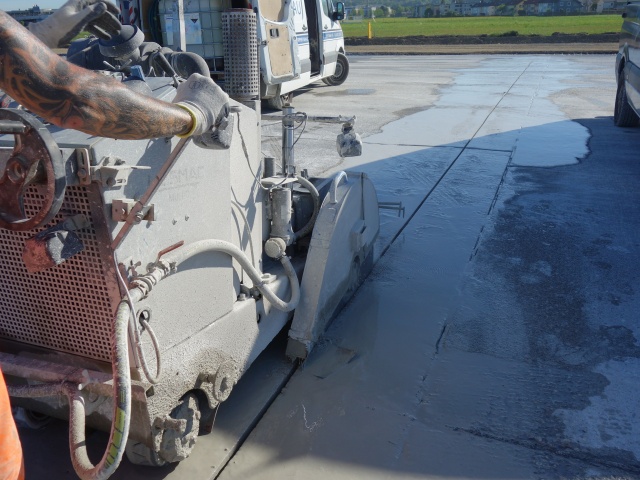 In a large scale project, the 15/33 runway at Salzburg Airport was refurbished from 24 April to 28 May 2019. The concrete runway, built in the 1960s, would remain as the foundation for the new covering layer consisting of 120,000t of asphalt.

Part of the runway renovation project was the core drilling of more than 800 holes for the runway illumination, as well as 10.8km of floor cuts. Three specialised construction companies, Possehl Spezialbau, ÖBA and OAT, worked simultaneously in order to finish the works on time. The key to the renovation of 2,850m runway was to maintain the current concrete runway as a base layer, thereby avoiding transport and removal costs. With a ‘beheading machine’, the 45m wide runway had to be divided into smaller concrete panels, which would act as a tension free base layer.  In just five days, this required over 10.8km of preparative floor cuts with a width of 15mm and a depth of 300mm, amounting to 240 cuts of 45m each to be made. Tyrolit floor saw blades dealt with the task using solutions the cutting contractors and Tyrolit application engineers devised.

After the new layer of asphalt was finished, over 800 core drills for the LED illumination of the runway had to be undertaken in only five days. For this challenge, the drilling contractors used once again Tyrolit drill bits with TGD Technology. The drilling, as well as the subsequent tasks, were finished within the planned period, meaning that the airport was also reopened as scheduled.

For the floor sawing tasks at Salzburg Airport there were used three different specifications of Tyrolit floor saw blades with TGD Technology: FSL***-C, FSM***-C und FSH***-C. All are suited for cured concrete with soft to very hard material aggregates and are laser welded up to diameters of 1,200mm. The intelligent distribution of the grain enabled by TGD Technology ensures constant high cutting speeds and smooth running. Tyrolit CDL*** core drill bits with TGD Technology ensure constant high cutting speeds as well as smooth operation and come with a long life span. They are equally suited for the drilling of concrete and asphalt and were, thus, the perfect choice for the drilling for the holes of the LED illumination part of the Salzburg Airport refurbishment.