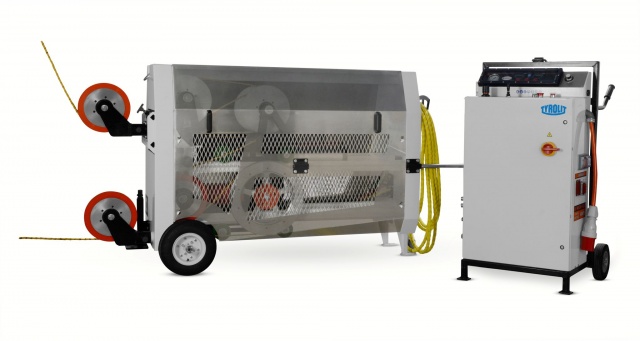 Up to THE CUT concrete sawing equipment

As the world slowly recovers from the coronavirus meltdown, businesses are licking their wounds and assessing the damage. Nobody seems to have emerged out of the crisis unscathed. As far as the concrete sawing industry is concerned, the three month lockdown has impacted heavily on the well-being of both suppliers and contractors. Demcon and BeBoSa – the industry’s most significant trade shows – have been postponed until 2021. Let us just hope, though, that no permanent damage has been done and the market will get back to normal sooner rather than later. In the meantime, PDi’s Andrei Bushmarin recaps the latest news gleaned from some leading industry players.

Cuts Inc. is a family run specialist contractor and manufacturer of bespoke sawing and drilling equipment, based out of Knoxville, Tennessee. It was established 16 years ago by Matt J. Hephner, a professional concrete cutter with a track record of 36 years. Some 10 years ago, Matt took on a job that required making multiple cuts on a 380mm thick sloped concrete surface as part of a big manufacturing plant’s shutdown. As conventional floor saws didn’t cut it, so to speak, wall sawing seemed to be the only viable method. The problem, however, was that those multiple cuts had to be done within a very short period of time. That would mean adding five more crews and another five wall saws to complete the task, which rendered the project economically unfeasible. But, rather than giving up on it, Matt and his team put their heads together and came up with a skid steer based cutting tool that fully eliminated the set up time required by the wall sawing method. The mobile cutting system proved a huge success, allowing Cuts Inc. to finish the job ahead of schedule, and following that breakthrough, the company has developed other sawing and coring attachments for the skid steer platform.

Now available in three models – the SS2600, the SS3600, and the SS4200 – Cuts Inc. skid steer saws accommodate diamond blades to cut up to 460mm deep, while custom builds can go as deep as 510mm. Most customers use the machines for cutting asphalt and concrete roads and highways, but they are also applicable to cutting stone, concrete panels, sewer and drainage pipes, fibreglass panels and aluminium. According to Matt Hephner, the company gets inquiries for skid steer saws on a daily basis from every corner of the world. For example, Avionics Limited, an Australia based airfield lighting specialist, has used a Cuts Inc. machine when carrying out an upgrade to Melbourne Airport’s lighting system. The job involved 3,000 light fitting locations and nearly 35,000m of slot cutting, ranging in size from 15mm x 30mm to 35mm x 30mm. Avionics chose Cuts Inc. on the basis of the company’s contracting background. “Matt and his men understand the complexities of slot cutting and have been able to incorporate this understanding into their design,” explains Avionics construction manager Shane Webb.

The Tyrol based heavy hitter has extended its wire sawing range with the addition of the WCE18 model suited for such demanding applications as the controlled demolition of bridges, industrial stacks and foundations. Powered by an 18kW high frequency water cooled motor, the new wire saw comes with outsized 15m wire storage. Thanks to the large drive wheel (445mm in diameter), the WCE18 boasts high initial torque and slip free power transmission. Other highlights include infinitely variable cutting speeds from 0 to 25m/s, adjustable and a control board with intuitive interface.

Hycon takes the weight off the operator’s shoulders

Hycon, a Denmark based manufacturer of hydraulic hand held tools for cutting and demolition applications, has added the ‘SawEZ’ guide rail to its portfolio. Fully compatible with Hycon’s HCS16 and HCS18 cut off saws and HRS400 ring saw, the SawEZ effectively turns these hand held machines into a fully blown wall sawing system at a fraction of the cost. According to the Danish manufacturer, the tried and tested approach involves making a pre-cut with the HCS18 to a depth of 187mm and then finish the job with the HRS400 ring saw reaching to a depth of 300mm. The lightweight (only 24kg) guide rail comes with an adaptor that allows users to switch quickly between different machines. Fatigue free operation is another major benefit of the SawEZ solution. Measuring 2m long as standard, the guide rail can be extended to any desired length by adding 1m sections to it.

Hilti, a Lichtenstein based trendsetter in concrete coring and sawing solutions for over 20 years, currently offers two flagship electric models - the DST 10-CA and the DST 20-CA - to its customers. Powered by a 10kW motor, the smaller DST 10-CA comes very handy in confined and limited access areas. Thanks to a traction control system, the saw boasts a power output of 8kW and is capable of cutting to a depth of 380mm. A 16A plug makes it a versatile tool that can be deployed on any construction site around the world. The more powerful DST 20-CA is designed for tough applications such as sawing through heavily reinforced walls and floors. Featuring an integrated convertor box and wireless remote control, the wall saw is compact and easy to transport and set up. Drawing power from an industry standard 32A plug, it reaches as far as 730mm deep. Both models feature Hilti’s proven ‘Cut Assist Technology’ allowing for fully automated cutting.

The manufacturer’s wire sawing range includes three off the shelf electric models - the DSW 1005-E, the DS WS15 and the DSW 3018-E - plus a host of bespoke solutions. On both standard and tailor made machines, the tensioning of the diamond wire is optimised via a pneumatic system. Driven by a 10kW motor, the compact sized DSW 1005-E wire saw is a first choice for miscellaneous small jobs. The mid-range DS WS15 is a true all-rounder suitable for various wire sawing tasks. When output and performance become paramount, Hilti recommends using the DSW 3018-E model. Powered by two 15kW motors, the heavy duty DSW 3018-E delivers strong performance when the dismantling of concrete structures to short deadlines is required. An ample choice of wire sawing accessories is available from the manufacturer, along with dust and slurry management solutions.

Austria based EDT Eurodima has been manufacturing concrete sawing and drilling machinery for over 15 years now. Last year, the Austrian manufacturer used bauma to unveil its latest ‘Servo Power’ WS20E and WS20H wall saws. Powered by a 23kW water cooled servo engine, the new models ensure a maximum cutting depth of 725mm with up to Ø1,600mm diamond blades. Other features include a two speed gearbox providing high torque even at low cutting speeds, compact ergonomic design, a removable blade guard, simple adjustment of the guide rollers and low maintenance costs (with service intervals only required every 250h). Johannes Radauer, head of sales and marketing at Eurodima, reports a very positive reaction from the market to the servo technology: “Sales of the servo engine systems have been steadily growing over the past two years, allowing us to continuously expand the global dealer network.”