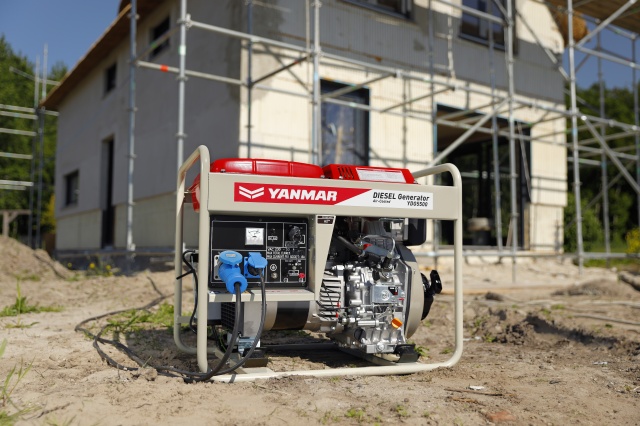 Upgraded and enhanced generators from Yanmar

Yanmar has introduced a series of enhanced features to models in its portfolio of ‘YDG Series’ generators. These are now available for the first time in Europe and meet Stage V emissions standards.

Featuring a host of engineering upgrades and powered by a Yanmar air cooled ‘L-Series’ engine, the generator series includes the re-engineered YDG3700, which has four models ranging from outputs of 3.3kVA to 3.7kVA, and the four models in YDG5500 series with outputs ranging from 5.1kVA to 5.8 kVA. Previously made in Japan, production of the sets has also been moved to Yanmar’s L-Series engine manufacturing facility in Italy which will greatly boost lead times for customers anywhere in Europe, Middle East and Africa. Carlo Giudici, sales and marketing director, Yanmar Europe, said: “These upgraded and precision engineered models are brand new entrants into the European market and are established, yet meticulously advanced generators, which meet all global emissions standards and incorporate cutting edge components.

“As the generators are now made in Italy, this also means that the many loyal customers of the YDG Series can look forward to a much shorter ordering process for new units. The upgraded YDG Series of generators is especially quiet and come in a versatile power range to meet many required outputs. Also, due to their very low fuel consumption, the generators can be used at full capacity for up to 10.5h. Furthermore, Yanmar Europe, headquartered in the Netherlands, has taken over the sales of YDG products for Europe, Russia, Middle East and Africa, and as we also have a comprehensive parts centre near Amsterdam, customers will be assured that Yanmar will provide reliable and fast back up service and parts. We are also sourcing more European components.”

Carlo Giudici concluded: “The generators are now suitable for the European Union market as they have Stage V and CE certification. Based on the outstanding L-Series of engines, the new models within the YDG Series are an extremely reliable and easily portable power source whatever the demands of the job site.”