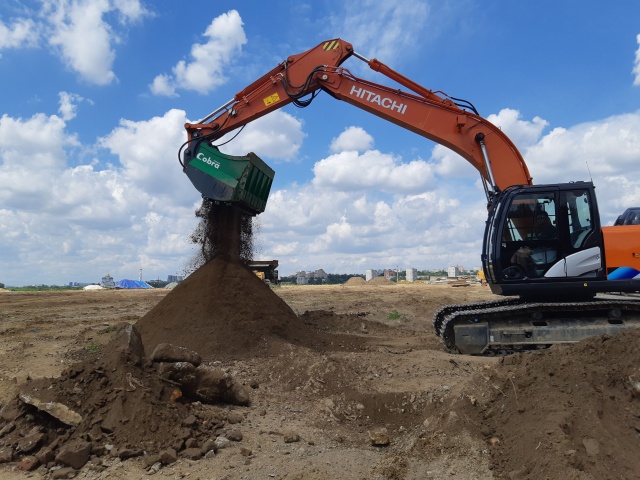 One of the most popular applications of these screening buckets is in sorting construction waste; as a result, some Russian companies have begun to recycle such material.

A 20t Hitachi zx210 crawler excavator was selected as the carrier vehicle for the 1.4 m3 Cobra S3-180 screening bucket which was delivered from the factory in Finland to the customer's site in Moscow. By this time a lot of work had accumulated for the bucket and the first application on the customer's site was screening stale wet peat. This lowland peat was brought from the fields and was loaded with various sticks, stones and other materials. In addition, the peat was quite wet and partially caked with many pieces of the peat requiring crushing prior to sorting. The client had a large trommel screen, but with a lump of peat there was nothing that could be done to break the material down so was ineffective.

The Cobra screening bucket successfully completed the task, sifted the peat, removed the unwanted materials and simultaneously crushed the caked peat pieces. As a result of screening, fine grained already aerated peat was obtained, ready for shipment to customers. The next task for the screening bucket was screening construction waste, which was initially the reason for purchasing the equipment, which comprised of a mixture of concrete, bricks, rebar and wood. As a result of screening, clean soil was obtained, ready for creating soils and peat mixtures.