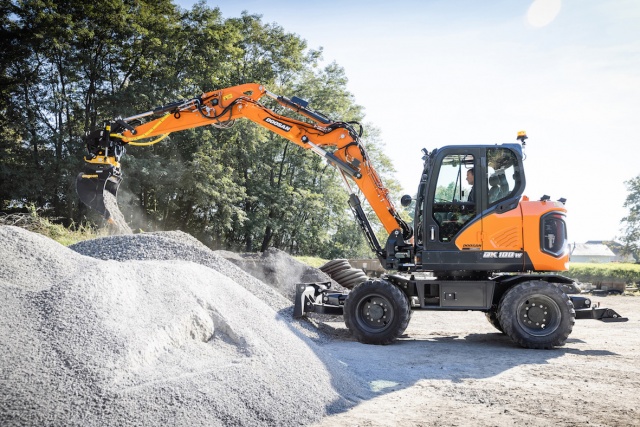 This year sees new machines arriving from manufacturers Doosan and Hitachi. Doosan has introduced its new articulated dump trucks, to name but one example of its latest offerings’, while Hitachi has released the next generation Stage V wheel loaders.

Doosan now offers the DA30-7 and DA45-7 Stage V compliant articulated dump trucks, so called ADT’s. The DA30-7 has a payload of 28t, while that of the DA45-7 is 41t. The DA30-7 is powered by the Scania Stage V compliant DC09 9l diesel engine providing 276kW of power. The DA45-7 is driven by the Scania Stage V DC13 13l diesel engine with an output of 368kW. The main difference in the engines from their predecessors is the improved after treatment system. The DA45-7 features a new cab and a semi-levelling front suspension that adjusts itself independently depending on the operating conditions. Other features include the design of the front frame and bonnet components on the trucks; functional changes such as a new positioning of diesel and AdBlue tanks; a relocated greasing system, and additional space above the automatic lubrication system. The forward turning point, the tandem bogie and the sloping rear frame results in good rough and soft terrain capabilities, according to Doosan. Doosan also states that the body shape and sloping frame ensure equal load distribution on all the wheels making these machines suited for soft terrain work. The design of the articulation also provides equal load distribution on the wheels on both the left and right hand side when turning.

The new 4x4 version of the DA45-7 ADT is intended to compete with rigid dump trucks, so called RDT’s, in the 40t class. The 4x4 DA45-7 ADT complements Doosan’s current range of Stage V compliant 6x6 ADT’s. The front truck and cab unit is the same as in the original 6x6 model, with modifications being made on the rear dumper unit only. Featuring a ZF EP8-420 transmission, the new model is a two-axle ADT with twin wheels at the rear and with a dumper section similar to that found on RDT’s in the 40t class. The model has a width of less than 4m to avoid the need for special transportation and, according to Doosan, offers a better turning radius than a comparable RDT. According to Doosan, advantages of the 4x4 ADT include the ability to climb up bigger inclinations compared to equivalent RDT’s; good performance in wet and slippery conditions and being able to operate in heavy rain, to name but a few.

Doosan Infracore Europe has also launched the new DL-7 wheel loader range, driven by Stage V compliant engines. The biggest standard models are the DL420-7, DL480-7, DL550-7 and DL580-7, with maximum bucket capacities from 4.5m³ to 6.4m³. The ‘Z-kinematic’ lift arm delivers high breakout forces and lifting capacities and a large dump angle for unloading sticky materials. The loaders have smooth hydraulics and auxiliary hydraulic connections, and are equipped as standard with a third spool valve with settable flow and detent function. The cab is designed to provide an improved field of vision, and the loaders’ also offers the option of electrically adjustable rear view mirrors. Using the Doosan ‘Smart Key’ system on the control panel, the operator can start the machine using a keyless device. The models feature an integrated ‘Electric Main Control Valve’, ‘Load Isolation System’, automatic five speed ‘Powershift’ transmission, heavy duty HDL axles, enhanced traction with ‘Differential Hydraulic Lock’, and optional independent oil cooler circuits for the front and rear axle. Equipped with the new Doosan and Scania Stage V six cylinder engines, the loaders provide up to 5% greater fuel efficiency than the previous generation machines. The Doosan ‘Smart Guidance System’ is a new feature which is said to help the operator achieve a more fuel efficient operation. The loaders are also installed with the ‘DoosanConnect TMS2.0’ wireless fleet monitoring system.

Hitachi has introduced the ZW310-7, a larger next generation model from its Stage V compliant wheel loader range. To protect the operator and machine from potential hazards, it provides a clear view from all angles. With the ‘Aerial Angle’ camera system, operators have a 270o bird’s eye view of the job site, while the rear obstacle detection and warning system alerts if anything is close to the rear of the machine. The model has low noise and vibration levels, and features an improved seat with mounted electric pilot control leavers, new monitor controller and side switch panel. High levels of productivity are said to be ensured by fast cycle times, a high breakout force and loading capacity, and improved acceleration on inclines thanks to sensors installed on several components. RPM is automatically increased thanks to the auto power up function. The model also offers faster and more efficient short loading operations due to the ‘Approach Speed Control’ feature, according to Hitachi. The machine also features a payload monitoring system, as well as an ‘Eco gauge’ which helps operators monitor fuel consumption. Hitachi states that reliable performance to boost uptime is possible as the ZW310-7 is built with durable components, such as the axles and frame, intelligent prevention systems and easy maintenance features. This can be maximised by the use of customised Hitachi buckets and robust ground engaging tools. Hitachi provides after sales services, and access to vital data and tools. These include remote monitoring systems, ‘Owner’s Site’, ‘ConSite’ and the ‘ConSite Pocket app’.

Hitachi has also unveiled the ZW180-7, a smaller next generation model from its Stage V compliant wheel loader range. According to Doosan, owners benefit from the model’s efficiency and maximum uptime, as this gives them control over their profits as well as their fleet thanks to remote monitoring tools and services. This model also features low noise and vibration levels, and Hitachi states that much consideration has been given to operation with the improved seat with mounted electric pilot control leavers, ergonomic multifunction lever, anti-slip steering wheel, 40% larger and adjustable armrest with integrated controller and side switch panel. The model also features all round visibility and a 270o bird’s eye view of the job site, as well as a LED work lights package and a rear obstacle detection and warning system. The model has three types of lift arms available: standard, high and parallel. Hitachi adds that the model features faster and more efficient short loading operations due to the ‘Approach Speed Control’ feature, which reduces fuel consumption by 16%; reduced cycle times; improvements to the engine torque; Eco gauge and a payload monitoring system.

Hitachi’s new wheel loader ZW220-7 has an engine maximum power of 157kW and an operating weight of 18,190kg to 19,450kg. The ZW220-7 is said to deliver reductions in fuel consumption and greater efficiency with features such as approach speed control. The payload checker enables the operator to keep track of load weights and find out how much material is in the bucket or truck. The model features synchronised motion of the seat and console and seat mounted electric control levers. Easy operation is said to come with the ergonomic design of the multifunction lever, the anti-slip steering wheel and the adjustable armrest with integrated controller. The operator navigates through the menu on the 203mm LCD monitor with the sub monitor controller. The refreshed layout has been designed to provide a clear display and desirable functionality. The model also features storage space for personal belongings and practical functions of the joystick steering system, such as wiper and horn.