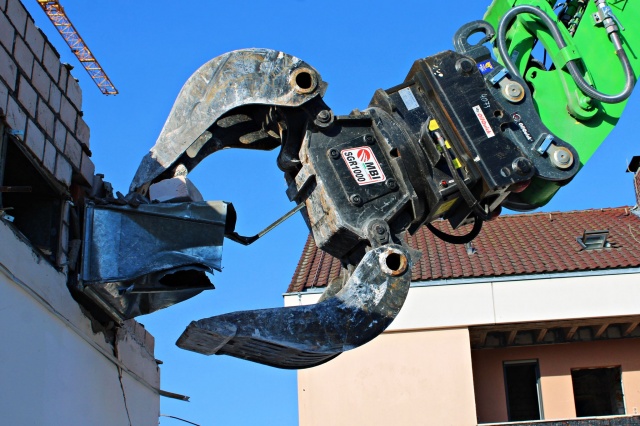 New sorting grapples and additions to its ‘Multisystem’ and ‘Combi Crusher’ line are but a few of the new products from Italian manufacturer Mantovanibenne. Some of these were used during work on the expansion of the A3 motorway in Germany.

MBI Group, specialises in designing, manufacturing and marketing attachments for the construction, demolition, recycling and earth moving industries. Founded in 1963 in Mirandola, Italy by Alberto Mantovani, the company is now led by his children, Roberta Mantovani, president, and Paolo Mantovani, vice president and CEO. Since the early 1990s, when it launched its first demolition attachments, the MBI demolition line has become more and more important for the company, now being its core business. Today, the MBI product range includes hydraulic attachments for different jobs comprising of concrete crushers, metal shears, pulverisers, grapples and many more.

The product lines are divided into demolition, handling and selection, ‘bucket world’ and quick couplers. The equipment has been created with hydraulic and mechanical rotation, using materials of high quality and resistance. With kits and interchangeable parts, 2019 represents the end of a three year cycle of innovation and growth for the MBI Group. 2020 is seen as the year in which the group is able to continue to offer high quality products and, in their own words, “Confirm ourselves as one of the pioneers in the sector and a reference point.”

This line of concrete crushers with asymmetrical jaws and shear shaped blades is now complete, with the Combi Crusher design combining high penetration teeth for concrete cracking and shear jaws for metal cutting. The new ‘Combined Cutter’ line is a hybrid product that incorporates characteristics of the MBI ‘Eagle Shears’ and ‘Concrete Crusher’. The Combi Crusher features two oversize cylinders and a central twin pin solution, which enables larger opening and a higher crushing force. The asymmetrical and specifically shaped jaws have been designed to cut steel like dedicated shears and crush concrete at the same time. The body design provides penetration of concrete and cutting of metal structures, while interchangeable blades and teeth facilitate maintenance. On the other side of the unit there are double jaws with two interchangeable teeth.

This year, two additional models will be released in the line: the CC65 and the CC90. With a weight of 6.65t and 9.5t respectively, they are suitable for excavators from 60t to 95t, with a cutting force of 423t for the CC65 and 494t for the CC90. Furthermore, a ‘Bibooster’ system multiplies performances by increasing working pressure and speed while remaining protected inside the cylinder rod.

Multisystem, the most dynamic machine in the range

Other developments aimed at demolition contractors is the redesign of the MS demolition multisystem line with five new models, with three of them replacing old models and two extending the range. Thanks to interchangeable jaw kits, the MS can be transformed into different tools, which means the customer does not need to buy several different attachments. The new MS series is characterised by an increase in performance and by the introduction of wear parts that can be substituted. Part of the Multisystem family is the MS140, heir of the MS130, and is said to be a ‘real demolition titan’ weighing more than 14t and features a new hydraulic system that increases working speed by 20%. In addition, the machine body has been reinforced and the jaw kits have been updated to maximise concrete penetration.

The SGR was initially designed to be a demolition grapple, which means that its structure and hydraulic system were developed to perform heavy duty jobs and be resistant to extreme stress. The double rotation motor and double cylinder featured on the biggest model, together with the reinforced structure, makes the difference when SGR faces tough working conditions. The SGR line has been under intensive development work during the last year and is now ready to be presented with a new hydraulic system. New cylinders, distributor, cross ‘releave’ valves and hoses increase reliability - a necessity for heavy duty tasks.

The MBI rotating pulveriser RP-IT, with its sturdy rotation and particular jaw design, allows it to perform both primary and secondary demolition tasks. The new RP16-IT rotating pulveriser has interchangeable wear parts and extends the rotating pulveriser range whilst featuring some of the fundamental characteristics of Mantovanibenne pulverisers. The inverted cylinder maximises rod protection and durability, while the new jaw plate increases wear resistance. In addition, the new plate comprises of two parts and allows the substitution of the worn part only, leading to operational savings.

Six lane expansion of the A3 motorway in Germany

A project that has seen Mantovanibenne equipment in operation is the six lane expansion of the A3 motorway in Regensburg, Germany. 20 men, 18h and ‘the best of MBI demolition equipment’ was necessary to demolish the southern highway bridge at Regensburg, which was almost 41m long and 22m wide. The A3 motorway is a major artery for Germany, connecting the north of Austria with the south of the Netherlands. In order to meet deadlines in so as to reopen the road to traffic, it was necessary to use many vehicles equipped with large scale demolition equipment working non-stop. Four MBI machines were allocated over the entire area of the bridge, undertaking the primary and secondary demolition necessary for the disposal of approximately 1,900t of material per day.

The 8,250kg crusher CR80R and the brand new 9,500kg Combi Crusher CC90R were used for the primary demolition of reinforced concrete. The CR80R is equipped with hydraulic rotation with a double fifth wheel for 360° positioning and a speed valve capable of regenerating the oil used during the closing of the two cylinders to increase the working speed. This demolition grapple, with a central double pivot system that increases the opening and the force transferred to the tips, is suitable for primary demolition of reinforced concrete. The CC design with combined demolition pliers, is unique in that it combines penetrating and interchangeable teeth for breaking concrete and jaws for cutting metals. This model was fundamental for dealing with the reinforcement as it incorporates shear blades which, together with the cutting guides, allow effective cutting of metal materials.

The CC90R, which is the latest addition to the MBI range, weighs 9.5t, making it suitable for excavators from 75t to 95t and has a maximum claw opening of 1,750mm. The CC65R, is a 6.65t Combi Crusher, which maintains the same technical characteristics as its larger sibling including continuous hydraulic rotation, speed valve and interchangeable parts. The CR range is available in 12 models from 240kg up to 12t, while the CC range is available in four models: CC25, CC35, CC65 and CC90.

The secondary demolition of the German road was equally important requiring quick processing and the disposal of 19,000kg of waste material to ensure the reopening of the highway on schedule. The rotating crusher with interchangeable toothed plates, the 5.2t RP50-IT, is equipped with total rotation and a patented speed valve. It has two types of interchangeable plate pairs, upper and lower, to modulate productivity according to requirements. The crusher grinds the concrete, reducing the volume of the material on the ground, pulverising and expelling it thanks to the crushing surface designed ad hoc. The RP-IT range is available in seven models ranging from 1.1t to 8.2t.