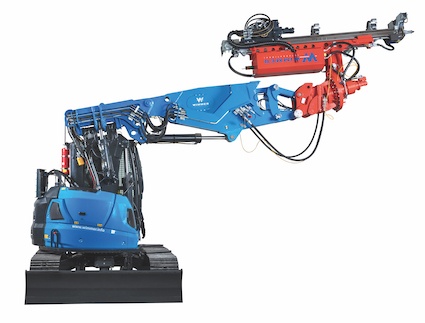 The new ‘Blue Badger’ tunnel excavator from Wimmer is a tunnelling machine specially developed for applications in connection with the ‘New Austrian Tunnelling Method’ (NATM).

The 14t excavator has an engine output of 53kW and is highly suited to excavation work, as well as for securing and deburring. It offers high hydraulic power for attachment tools, and as a complete package, it is matched to Wimmer attachment tools. As a result, it can be offered as an overall concept especially for smaller tunnel cross sections from 3.5m upwards. Despite its total weight of approximately 14t, the Blue Badger has high breakaway forces for driving. The concept of the boom (swivel arm with 2x45° swivel radius), its high mobility and higher load capacity for attachment tools also result in flexible and wide ranging use in tunnel construction.

The Blue Badger was recently used in the Plabutsch Tunnel (Pyhrn motor way near Graz in Austria). In the course of the renovation work, cross passages were constructed with its help during the beginning of 2018. In December 2018 a model worked in the Auberg tunnel area in Traunstein, Bavaria, Germany, for the company Marti GmbH. The tunnel is designed to relieve the traffic congestion in Altenmarkt, and is planned as a section of the bypass for a length of approx. 1.5km, with completion estimated in early 2021. The ‘Blue Badger’ was used in the latter application for the construction of a rescue tunnel.  It is also being used in France, near Paris, on the Spie Batignolles project, which is part of the ‘Grand Paris’ subway construction project being undertaken on behalf of RATP, the metro operator, and will be used in France until May 2019, working on several sections.