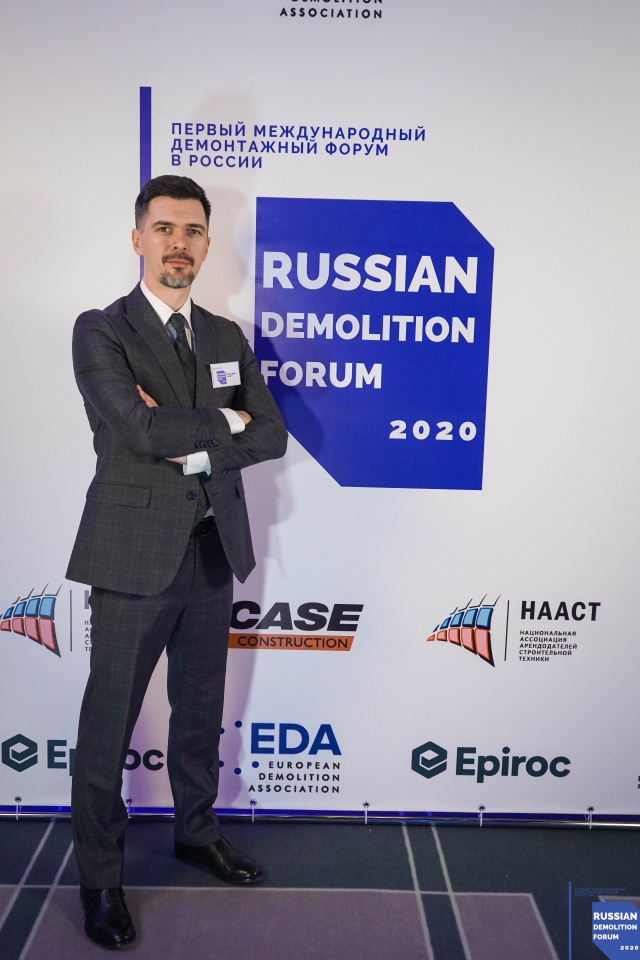 ‘Winds of change’ blow through the Russian demolition industry

Otto von Bismarck, the first chancellor of a united Germany and an eloquent speaker famous for his witty laconic remarks, once said of the Russian cavalry, “they saddle up slow, but ride fast”.

That sums up the Russian character in a nutshell. We do tend to take our time in making a decision, but once our mind is made up there is no stopping us. I have been hearing people talking about the necessity of creating a demolition association in Russia since 2006 when I first joined the industry. For years, however, it remained little more than a palaver until a man came along who jumpstarted real change and organised the first ever Russian Demolition Forum.  PDi’s Andrei Bushmarin reports.

Russia is not only rich in natural resources; its main asset, wealth and treasure are its people - something that the Russian powers that be are yet to fully comprehend. Russians are intelligent, well-educated and hard-working and they always accomplish whatever task they set their mind to. In this sense, Artem Kondratyev, the general manager and creative force behind the Russian Demolition Forum, is as Russian as it gets, the quintessential Russian.

Artem Kondratyev hails from Rostov-on-Don, the biggest port city located in the south of Russia. An alumnus of the Southern Federal University with degrees in economics and law, he moved to Saint Petersburg in 2016 where he became involved in the demolition business working for a major demolition company. Winning contracts is not easy anywhere, but in the Russian construction and demolition game it requires extra effort. A born go getter, Artem became a valuable member of the team and was soon appointed head of the Moscow division. He represented the Russian demolition industry at the 10th World Demolition Summit in Dublin in 2018. It was in Dublin that he comprehended the benefits of working within the framework of a trade association and how sorely the Russian demolition community was lacking. From that moment on he decided to put his considerable energy into creating a unified platform for demolition professionals in Russia. A year and a half later, his vision materialised into the first ever Russian Demolition Forum.

The one day event, where PDi was the main media partner, took place on 5 February 2020 at the Korston Club Hotel in Moscow. The choice of venue was somewhat symbolic, given that the hotel is earmarked for demolition in the coming months. The turnout exceeded the organisers’ wildest expectations, with some 110 delegates representing 60 companies attending the forum. As important as numbers are, it is the quality and status of the speakers and attendees that make all the difference in the end. And there was no shortage of top notch industry figures at the forum.

Francisco Cobo, the president of the European Demolition Association, kicked off the event with a speech extolling the virtues of being part of the association and presented Artem Kondratyev with an appreciation certificate for a job well done. He was followed by Jose Blanco, the EDA’s secretary general, who delivered a presentation dedicated to the latest trends in demolition, recycling and decontamination. Then seven speakers from Italy, the UK, Australia, the Netherlands, Finland and Serbia, all well-known and respected names in the global demolition community, presented selected case studies to the audience.

Mission accomplished: association is shaping out

The event’s grand finale was the award ceremony for the best demolition projects. For over a year, Russian contractors were submitting entries for the Forum committee to evaluate. In the category ‘Collaborative Demolition’, the winners were OOO 'Stroiexporesurs', OOO ‘Viva-Trans’ and 'Crushmash Group'. OOO 'Tehkno Digger' won the ‘Residential Demolition’ category. ‘Ecosnos Group’ was presented with the ‘Industrial Demolition’ award. In the category ‘Best Environmental Practices’, the winner was OOO ‘JBS Engineering’. OOO ‘AlexanderGRAD’ took ‘The Implosion Demolition’ award, and OOO ‘Sfera Rezki’ received the ‘Non-destructive Demolition’ trophy. The awards were presented to the winners by Elena Kelep, a model and singer/songwriter, and herself the holder of the Mrs. Russia and Mrs. Universal Grand Prix 2019 titles. However, the most important outcome of the Russian Demolition Forum was that on 6 February 2020, 25 demolition companies signed a ‘Memorandum of Intent’ aimed at creating Russia’s Professional Demolition Association.