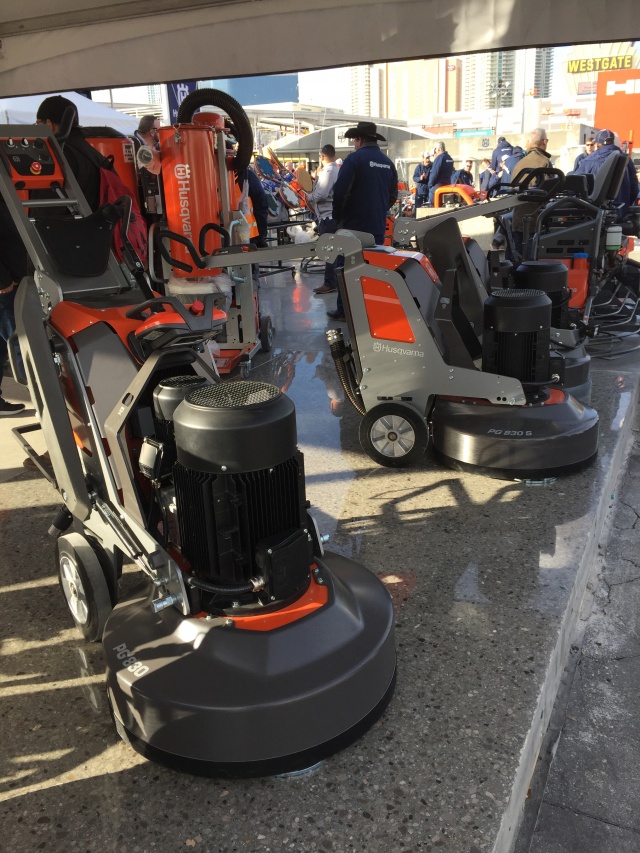 Winds of wow in Vegas

It was a breezy week in Vegas, as World of Concrete warmed up contractors for a busy 2020 construction year.

The 2020 World of Concrete more than held its own in its triennial role as an industry ‘warm-up’ act for Conexpo/Conagg. Indeed, were it not for the calendar, one might imagine that it was largely business as usual at the Las Vegas Convention Center’s mid-winter assemblage of all things concrete and masonry.

According to the organisers, this year’s show attracted approximately 54,000 registered visitors - up 4,000 from the last Conexpo year in 2017 - and more than 1,300 exhibitors, 19% of which were first-timers. There may have been a little more elbow room than usual to navigate the exhibit halls and the blustery, yet always buzzing outdoor demonstration area, but World of Concrete 2020 was anything but scaled down. It boasted numerous product debuts from manufacturers eager to present their latest innovations to an audience that was as hard-core concrete focused as they come.

Some of the first announcements came from Husqvarna, which began its vow to introduce 35 new products by June, with a new eight size line of electric and propane powered planetary grinders. These range from the 2.2kW PG 540 to the top of the line 15kW PG 830, which is also available in remote control and single drive versions. Husqvarna also featured the PG 400 gas powered 400mm single disc floor grinder, designed to be matched with the equally new T 4000 gas powered dust extractor. For drillers, there were the DM 400 and DM 430 single phase 2.3kW electric drive motors, designed for core bit diameters of between 55mm to 300mm and 100mm to 450 mm respectively. The trend toward bigger floor polishing systems was evidenced by Husqvarna’s ‘Hipertrowel’, a ride on machine designed for new and existing floors larger 464m2.

Located nearby, Superabrasive has added a similar trowel to grinder/polisher as part of its Lavina product line, equipped with the propane powered 630 kg LP36 and four blade 185rpm rotors. At the other end of the Lavina grinding spectrum was the new 356mm electric L14E grinder, with speed settings of 400 to 1,000rpm.

Power and productivity on the move
While the surface preparation market appears to be gravitating toward size extremes, ‘cordless’ seems to underscore most new offerings from tool manufacturers. DeWalt debuted its DCH614 60V Max 44.4mm SDS rotary hammer, which the company says provides 10.5J and 380rpm for all types of concrete. The DCH614 also boasts a constant speed control feature that maintains rpm speed regardless of bit size or depth, and wireless communication with specially equipped DeWalt dust extractors such as the DCV 60V.

Hilti likewise expanded its cordless line-up with the TE500 A36, a 5.6kg, 36V version of its corded counterpart that the company says delivers 24.8N and 3,300imp/min. The tool is also ideal for chiselling applications, covering 1,000cm3 per minute and can be used with the BC 75 cordless vacuum, which is light enough to be worn backpack style for greater mobility.

Many other cordless tools were on display, including Bosch’s 18V CBH 36 C and 45 C, both of which are powered by the company’s new 8A/hour battery with a 45min recharge time. Makita is adding to its already expansive product inventory with the 18V X2 brushless 228.6mm power cutter, and 18V LXT brushless power scraper, both of which will be available this spring.

Of course drilling requires some tough bits, with Diablo bringing its new Demon SDS-Plus and SDS-Max 4-cutter full carbide head hammer bits for concrete with rebar applications. Nearly 80 different bits make up the Demon line, with sizes for SDS-Plus bits ranging from .787mm to 28.575mm, while the SDS-Max ranges from 9.5mm to 50.8 mm.

The biggest big equipment debut may well have come from Case, which announced a complete relaunch of 13 compact track loaders and skid steers as its B Series. All feature updated electrical and hydraulic systems, new operation and environmental controls and updated Tier 4 technology to eliminate the need for diesel particulate filters. The five compact track loaders range in size from 1,225 to 2,041kg, and 55 to 67kW, with the eight skid steer models ranging from 725.7 to 1,542kg and 45 to 67kW.

‘Meets and greets’
Some of World of Concrete’s newest faces were on hand to introduce themselves, even if their products are well established. At the booth of hydrodemolition manufacturer Conjet, representatives of the firm’s new leadership team welcomed both customers and the curious. “Hydrodemolition is a superior way to deal with concrete removal,” asserted Peter Ankerst, a member of Conjet’s ownership group. He added that the company plans to, “Put energy into developing a new generation of machines.” Conjet’s new CEO Robert Kreicberg, a former HTC executive, recognises that building awareness is the new leadership team’s top challenge. “We know we have some work to do, but we feel this is a good market for us.”

This will mean competition with Brokk owned Aquajet, which is working on allaying concerns about hydrodemolition’s water resource issues with its ‘EcoClear®’filtration system. This is designed to treat wastewater generated by its high pressure robotic machines for reuse, storage or release back into the environment.

Brokk also launched a new attachment, the BCP planer for removing material from walls, floors, and ceilings as well as for cleaning, renovation and restoration applications. The three models in the BCP series are specially designed to work with Brokk’s remote control demolition robots, providing what is said to be up to seven times the speed of handheld options with greater precision and safety.

Diamond Vantage displayed its new TS400 tile saw, with 1.5kW motor for cutting through larger materials up to 57mm thick. At 29.5kg, the saw is highly mobile, and includes features to help reduce vibrations.

Metabo, introduced it VB16Y battery powered rebar bender/cutter, which can cut or bend #3, #4, and #5 to pre-set or adjustable angles. Depending on rebar thickness, the company says the 18kg machine’s blades can make up to 5,000 cuts. Metabo has also adapted its MFE 40 wall chaser tool from Europe for US applications.

Stihl’s battery powered GTA 26 garden pruner may not be suitable for rebar, but the 1.4kg mini chain saw with its 101mm guide bar is ideal for trimming brush away from a job site. Stihl is also the latest equipment manufacturer to introduce an asset management system. Designed to function with any tool that generates magnetic flux, regardless of manufacturer, the Bluetooth enabled system currently provides operational data to plan maintenance schedules and make more efficient use of tools. This will be expanded to include anti-theft and other capabilities.

Nor forgetting that everyone needs a good knife, OLFA presented its new MXP-L and MXP-AL die cast aluminium utility knives. The MXP-L features OLFA’s classic ratchet locking mechanism, with an oversized design for greater control, while the MXP-AL’s oversized auto locking mechanism slides to the selected length and stays put. Both knives are fitted with an anti-slip grip that wraps around the back of the tool and a tethering hole at the tool end for easy securing.

World of Concrete also offered some clues about what contractors can expect in the coming months. Most observers are looking for a good first half, with subsequent months hazy given uncertainties such as the U.S. elections, trade disputes, and lingering effects of the coronavirus outbreak. There is however no shortage of optimism from the World of Concrete’s organizers. Nearly 500 companies have already booked space for the 2021 edition, reserving a total of 49,238m3 - nearly 77% of the WOC 2020 show floor. Conexpo/Conagg 2020 may well have a tough act to follow…and precede.